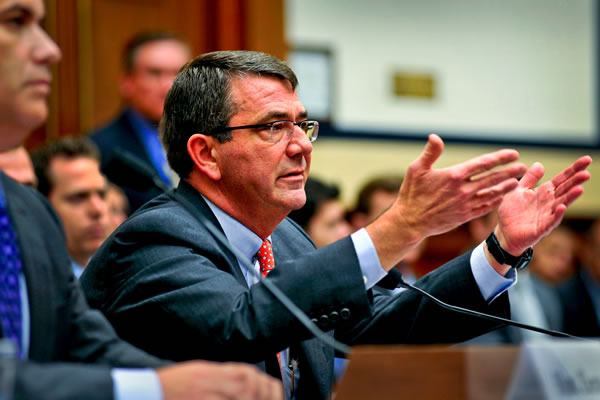 Deputy Defense Secretary Ash Carter testifies on options for implementing sequestration and its effects on the nation’s defense in a hearing before the House Armed Services Committee in Washington, D.C., Aug. 1, 2012. (Photo: DOD/Glenn Fawcett)

Jeff Zients, acting director of the Office of Management and Budget, said sequestration is not “a responsible way” for federal leaders to reduce the nation’s deficit and urged Congress to produce a balanced, bipartisan reduction plan before blind cuts become a reality in January.

Zients’ comments came on Wednesday before the House Armed Services Committee at the Rayburn House Office Building in a hearing to discuss national defense funding options.

Sequestration, a law that calls for Congressional leaders to reach a deficit reduction plans or mandatory cuts, would take place, split evenly between defense and non-defense related programs.

Congressional leaders face an approximately $110 billion deficit that must be resolved by November.

If the cuts were to take place, it could severely impact military operations as well as thousands of government contracts. Defense Deputy Secretary Ash Carter testified as well that the $55 billion in defense cuts would force the military to reduce training for warfighters and cut the number of weapons purchased.

“Some later-deploying units (including some deploying to Afghanistan) could receive less training, especially in the Army and Marine Corps,” Carter said. “Under some circumstances, this reduced training could impact their ability to respond to a new contingency, should one occur.”

Major defense contractors are wary of the impending cuts and debating whether they need to advise employees 60 days in advance of possible layoffs. That would be four days before the election. A law says those notices would have to go out ahead of time.

There are exemptions to sequestration. Across the board cuts would apply to Medicare providers, but not to Social Security, Medicaid, Medicare beneficiaries, civil and military employee pay, or veterans. Security programs include the DOD, Department of Homeland Security, Department of Veterans Affairs, the National Nuclear Security Administration, some management functions of the intelligence community and international affairs from the State Department.

Military personnel would be exempt from any automatic defense spending cuts, the White House said on Tuesday night.

Zients countered, saying civilian programs would suffer as well such as cuts to education, the Federal Bureau of Investigation and the Head Start program.

Instead, he said, Congress needs to reach an agreement to make the point moot.

The White House told agency officials Tuesday to “continue normal spending and operations” since more than five months remain for Congress to act to avert the automatic cuts.