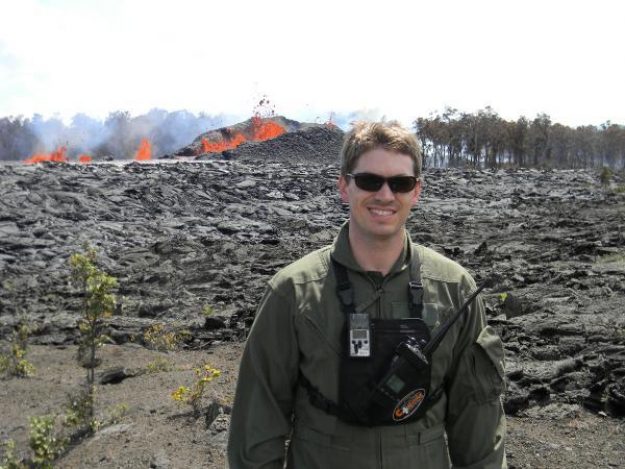 Weston Thelen poses with the subject of his life's work — volcanoes. (Thelen)

It’s not every day you run into a self-professed “volcano junkie.” Weston Thelen is surrounded by them.

Thelen is part of a three-person team that monitors volcanoes across the Hawaiian Islands for the U.S. Geological Survey's Hawaiian Volcano Observatory. As a seismic network manager, Thelen is responsible for maintaining and studying information from 70 remote autonomous seismometers that capture real-time data from earthquakes related to volcanic activity.

The seismometers, running on a mix of solar power and batteries, are shooting data back through telemetry for Thelen to pour over. The amount of data collected pales in comparison to the majority of Earth-related data coming into other agencies (about 6 gigabytes a day), but the decisions made from that data are crucial to the islands’ safety.

“It’s not like we’re meteorologists where we have satellites up over the ocean and they are sending us images of what’s coming and we can do stuff and make models around what we know is coming,” Thelen said. “A lot of the stuff that we are seeing is happening 30 miles deep. There is just no way to get there physically. We have to use these networks to understand what is going on down there and try to make an assessment based on whether the hazard has changed.”

Thelen said it's becoming easier to understand what’s going on below the surface, thanks to the ability to store the data the seismometers are collecting.

“We are finding that one person’s noise is another person’s data,” he said. “There is a lot of information in the data that comes between the earthquake about the Earth, about the processes that are going on underground, new processes within faults, non-volcanic tremors. We can do a better job of characterizing changes in velocity of the ground, which sometimes can give us an indication the volcano is pressurized before an eruption. That’s possible because we are able to store all of the data, not just the data for the earthquakes that have come in.”