Out of 30 finalists, there could only be one.

But, and we mean no disrespect to the app or its ambitious developers, the app is only usable by those living and conducting their work in the Big Apple. We feel it would be remiss if we didn’t highlight some of the outstanding federal projects we saw while we attended Thursday’s show.

So here are three innovations that really caught our eye. 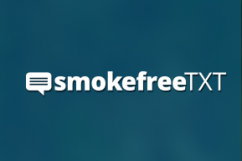 Studies have shown that behavioral intervention is a key part of getting people to stop smoking. Yet for a group like the National Cancer Institute, it’s hard to create a behavior program tailored to the 42.1 million Americans who still smoke.

With the help of ICF International, NCI decided the best way to reach millions of tobacco users was through a technology platform that millions of Americans are already familiar with: SMS messaging.

Smokefree TXT is an eight-week program that trains people using self-determination theory, focusing on resilience and skills building, and helping them move toward kicking the habit for good.

The program is more than just a daily nag to drop the Marlboro. As people sign up for the program, NCI takes some demographic information to tailor the messages to the user. The program also has a two-way texting feature that helps further adapt the program to teens, young adults and others.

Since 2012, the program has logged more than 100,000 users and sent more than 7 million messages. However, the biggest success metric lies in its 12 percent quit rate, which is double the national average of other smoking cessation programs. That backs up other studies done over the past few years that show text message programs increase the likelihood of success when it comes kicking a habit.

It’s extremely tough to manage a portfolio of aging buildings with modern technology, especially when you are the largest property owner in the country. Part of what makes it so tough is a lot of the information the General Services Administration needs to manage those properties is detailed on paper that’s often stuffed in some lost rack of filing cabinets. Even with information that was available via a computer, the data was disparate.
In order to combat this, three IT managers at GSA spun up a system that took not just building plans but also information from other lines of business that could be tied to building management, and fed it into an interoperable system that can be used across the country.

“We now have all of this data in one place,” Terry Forline, an IT manager with GSA, said. “We knew what we needed, and we made it happen.”

The repository, which was created in 18 months for only $350,000, requires no special training and can be accessed via a Web portal or mobile device.

A proof of concept has been successfully launched for 11 buildings in Washington, D.C., and Atlanta, with GSA expecting to have around one-third of its portfolio logged in the repository by year’s end.
“Nobody has done this,” Forline said Thursday. “This is not first in government; this is also first in industry.”

Multifactor authentication is a hot topic when it comes to credentials — just ask the people who run CENTCOM’s Twitter feed. While things like two-factor authentication and fingerprint scanners are popular on a consumer level, high-security sectors, like defense and finances, need something a little bit more secure.

In these sectors, voice authentication is catching on due the variety of factors that need to pass a security check before things are unlocked. Depending on the instance, a spoken password can provide three-factor authentication through spectrum analysis (sound of a particular voice), behavioral analysis (enunciation) and knowledge-based measurements (actual password).

This is the part where you are saying “Pfft, I just need a recording of a certain person saying a certain password to break into whatever I’m trying to breach. How secure is that?” MITRE asked that question, too. MITRE Chief Scientist of Speech Technology Qian Hu found an answer.

Hu and her team helped develop novel algorithms that actually differentiate between live voice and playback recordings. If a system fitted with this detection picks up on a recording, it then provides countermeasures to prevent attacks from being carried out.

The application can be integrated into various authentication platforms through an application programming interface, or API, and a voice authentication software development kit, or SDK. Hu said it is already in use on mobile devices, systems that guard health and financial data, and other various high-security networks.

Hu also said the program has been transferred to a top speech recognition company that works with biometrics, possibly paving the way for two-factor authentication to become a thing of the past.

“This is a component and a function to detect the playback,” Hu said. “This can be used anywhere.”

Catch synopses of all the projects featured Thursday on ACT-IAC’s
website.