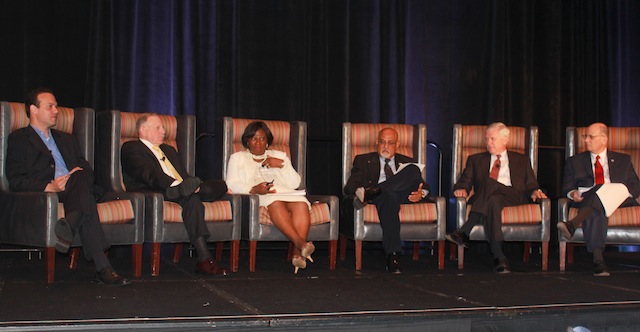 The Commerce Department has dramatically changed its information technology structure over the past year, delegating more authority to its 12 bureaus to better manage their own IT portfolios and providing stronger oversight from the department’s headquarters.

Speaking May 20 at the Management of Change conference in Cambridge, Md., Simon Szykman, the department’s chief information officer, said last June, Rebecca Blank, the Commerce Department’s acting secretary at the time, issued an IT portfolio management policy with his guidance that covered areas such as enterprise architecture, service catalog, IT budget formation, investment and acquisition review and IT workforce management.

“It provided guidance in several key areas that has provided us a significant difference in the ability to manage this department’s technology,” Szykman said. “Through delegation, we’ve empowered the bureaus to manage their own portfolios because – as with any large organization – you don’t manage just one portfolio. You manage a portfolio of portfolios of portfolios.”

Dornell said the changes to IT governance include a quarterly program review to update those at the department level on major activities and accomplishments.

The updates, Dornell said, include a quad chart format with schedule, risk, resources and progress to help highlight the initiatives with the highest level of risk. That will help the department make changes in scope or direction when needed.

There is also the Balance Scorecard Review that monitors the department’s performance in critical areas and activities against strategic goals. That includes a quarterly review that highlights the measurement of accomplishments, not just of the work performed. It also provides trend data to target weaknesses, problem areas and areas in which to increase or decrease resources.

And finally, there is a Commerce IT review roard co-chaired by the CIO and chief financial officer that reviews and evaluates major IT investments, including those with lifecycle costs that exceed $25 million, among other roles.

Berkowitz discussed the department’s new acquisition reform that aims to look more at the total lifecycle of an acquisition. He pointed to “Big A” acquisition, which aims to bring technology and financial officials into the acquisition process earlier.

Some of the key elements include:

One of the biggest parts of the new structure is an increased use of shared services. Amin said the department has moved to a cloud email offering that includes the Microsoft Office 365 suite of collaboration tools.

The department is also looking to consolidate its service desk offering, bringing together three bureaus with the department’s headquarters in a project expected to be done in fiscal year 2014.

NOAA, which Goldstein called one of the most innovative IT organizations in the federal government, has handled the change in stride, including its own NOAA CIO Council made up of the agency’s varying CIOs and assistant CIOs.

“We use IT to cover everything from the surface of the sun to the bottom of the ocean,” Goldstein said.

That includes changes to its human resources to leverage the IT workforce across the federal agency and changes to acquisitions as the agency has centralized its acquisition services through aggregated requirements.