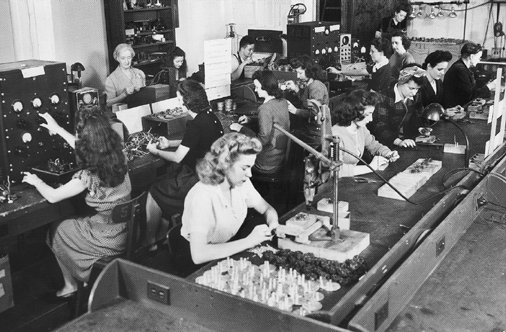 Ever wonder what some of the federal agencies looked like in the 1940s?

As part of the Department of Commerce’s release of the 1940 Census – the first Census to ever be released digitally – the agency took a look at the functions of NIST (then called the National Bureau of Standards).

Back in 1940 – still a year before the United States was officially involved in World War II – the department preparing for such an event.

An excerpt from the Department of Commerce:

Mobilizing for war in the face of these deficits required materials and production on a monumental scale. The National Institute of Standards and Technology (then called the National Bureau of Standards) was enlisted to ensure that those materials and the manufacturing processes used to shape them were of the highest quality and performed as expected.

By December 1941, 90 percent of NIST’s staff was engaged in war research. Among the first orders of business was to test enormous quantities of quartz, which was necessary for tuning the frequency of radios and radar. NIST tested 6 million pounds of quartz by the end of the war and found more than a 25 percent of it unsuitable for use.

With the country cut off from supplies of natural rubber, NIST supplied data and created tests and standards needed for the full-scale manufacture of high quality synthetics.

NIST built wind tunnels for bomb and projectile research and manufactured and calibrated thousands upon thousands of gage blocks—small metal rectangular blocks used in every aspect of precision metal work and the manufacture of interchangeable parts.

NIST researchers helped to invent, design, test, and build the radio proximity fuze, which triggers an explosive before it hits the ground to maximize its impact, for all types of ordnance. Eight million of these fuzes were produced by the end of the war.

From 1942 to 1944, NIST helped the U.S. Navy and U.S. industry to create an entirely new weapon called the Bat—the first truly self-guided missile. Like its namesake, the Bat had wings and used echolocation—but based on radio waves instead of sound—to find its target. Navy pilots used the Bat successfully during the final year of the Pacific campaign.

NIST was also home to the Uranium Committee, the precursor of the Manhattan Project. The 60 full-time staff devoted to the project came up with a means of producing purified uranium and graphite, methods to verify the purity and quality of materials needed to construct the bomb, as well as radiation safety standards.

The department goes on to say that a number of senior officials left the agency at the end of the war in 1945, making way for a new generation of scientists and a new host of challenges including NIST’s first forays into computing and atomic timekeeping—two areas where NIST continues to produce world-leading research.