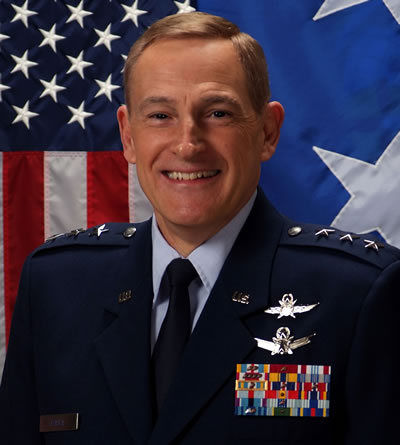 Basla is currently vice commander of the Air Force Space Command at Peterson Air Force Base in Colorado, where he assists the commander in organizing, equipping, training and maintaining mission-ready space and cyberspace forces and capabilities for North American Aerospace Defense Command, U.S. Strategic Command. He also supports the other functional and geographic combatant commands with missile warning, positioning, navigation and timing, communications and cyber capabilities.

Prior to his current assignment, Basla was vice director for C4 Systems for the Joint Chiefs of Staff at the Pentagon.

Watch Basla address the University of Albany football team where he played offensive tackle as an undergraduate:

Lord has served as Air Force CIO since July 2009 and will officially retire from his position on July 31.

Among his major accomplishments is building a communications framework for network-centric operations that will help the Defense Department in its quest for interoperability.

Lord also designated a federated Air Force enterprise architecture that was the first to be certified by the Defense Department’s Architecture and Standards Review Group, along with leading the development of a comprehensive aerial layer network that will support joint, real-time communications on the battlefield.

Lord pushed the development of department-wide IT standards that will establish the price of admission for joint warfighting and industry partnerships in cyberspace.

In 2011, he took part in FedScoop’s FedMentors program:

General Basla is a native of Syracuse, N.Y., graduating from Bishop Grimes High School. He received his commission in 1979 as a distinguished graduate of Officer Training School. General Basla has served in five operational communications units including commands at detachment, squadron and group levels. He has extensive joint experience including a tour as Director for C4 Systems, Joint Task Force Southwest Asia in Saudi Arabia where he delivered integrated network operations in support of United Nations security resolution enforcement against Iraq. He has served on the staffs of the Joint Staff, U.S. Transportation Command, Headquarters U.S. Air Force, Air Mobility Command and Air Force Communications Command. In 2005, General Basla received the Eugene M. Zuckert Award, which honors outstanding management achievements by a Department of the Air Force Manager.

Prior to his current assignment, he was Vice Director for C4 Systems, Joint Staff, the Pentagon, Washington, D.C., where he supported the Director of C4 Systems in supporting the Chairman of the Joint Chiefs of Staff in carrying out his duties as principal adviser to the President and Secretary of Defense and developing and providing guidance to the combatant commands on C4 systems and information capabilities as key enablers of combat forces.