As of September 26, Congress.gov dropped the beta above the logo and introduced some new features.
Source: Library of Congress

After more than two years, Congress.gov is finally moving out of its beta stage. 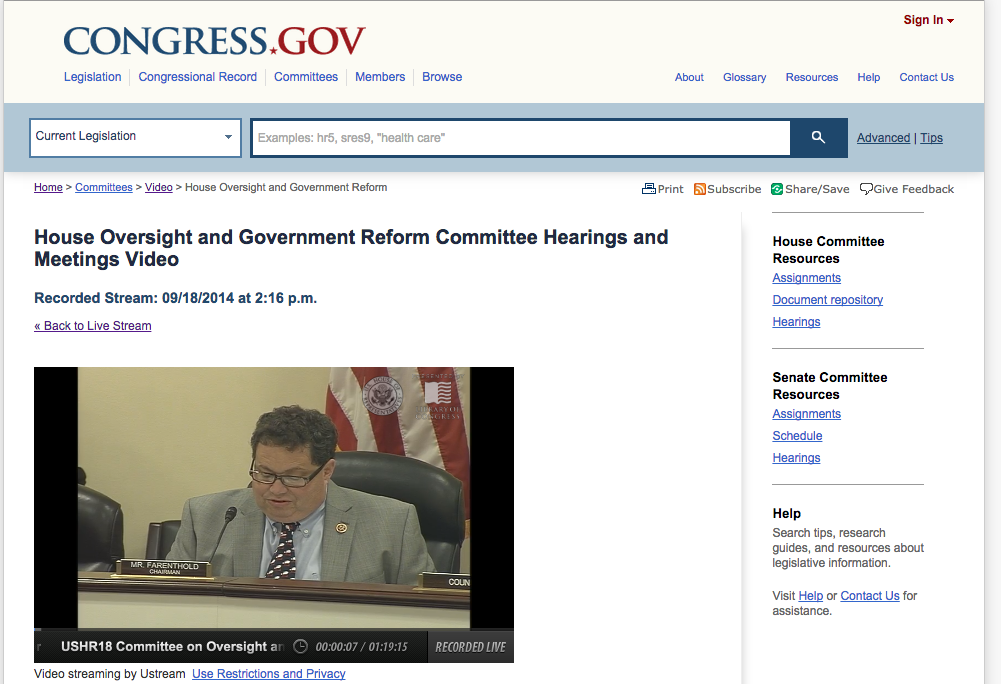 The website now streams and archives all House hearings on congress.gov
(Credit: Library of Congress)

The official Congress.gov website — the federal clearinghouse for all things legislation — came on board with a few new features, including a resources section and a section consisting of live streams of committee hearings out of the House of Representatives. In addition to providing the live streams, the new website also includes an archive of hearings from January 2012 to the present.

In a blog post announcing the full launch, Andrew Weber, the legislative information systems manager at the Library of Congress, said despite the two year beta stage, the website launched out of beta faster than other common web initiatives.

“Today, I’m happy to announce we officially removed the beta label,” Weber said in the blog post. “That’s roughly three years quicker than Gmail took to remove its beta label, but we won’t give you the option of putting it back on.”

The new version of the site also includes an advanced search capability with 30 new fields that allow a user to search through nominations, the congressional record as a whole or by the name of any member of Congress. Earlier this year, the website expanded its search function to include 22 legislative data fields and introduced a browsing feature that was updated in the launch away from beta.

The browsing section of the site also includes a new calendar view identifying when Congress is or isn’t in session, and users can also browse by sponsor or co-sponsor and see the results of roll call votes.

From its 2012 launch, congress.gov was in its beta stage until late last week when the standard version of the site went live.
(Credit: Library of Congress)

The Library of Congress launched Congress.gov in collaboration with the U.S. Senate, the U.S. House of Representatives and the Government Printing Office. The beta version of the site went online in September 2012 when the Library of Congress announced it would eventually replace Thomas.gov, which had been the location of all online legislative documents since 1995. About a year ago, Thomas.gov officially began redirecting to Congress.gov, even while the site was still in its beta infancy.

According to a statement from the Library of Congress in 2013, the Thomas.gov infrastructure could not handle the capabilities that the next generation of the site, which would expand its use across different platforms, would require.

Treaties, House and Senate executive communications and an index of the congressional record will all be added in the next year, according to a release.

“Just because the beta label has been removed doesn’t mean we will not still be hard at work updating the website,” Weber said. “We have a plan for new features and enhancements to launch throughout the next year and beyond.”

The Congress.gov site is mobile friendly; however, the Library of Congress also hosts an app that provides the daily congressional record to iOS users. When the app was launched in January 2012, it pulled from the Thomas.gov database.

In the blog post, Weber said the 2014 updates and the features that came alongside the launch were based on feedback from users.

“We really value the feedback that we receive about Congress.gov,” Weber said. “Whether it is a comment on this blog via the feedback form, or a tweet, we read them all.”

Jim Karamanis, chief of web services at the Library of Congress, said in an email statement to FedScoop that most of the user feedback has been positive.

“This project has reached this milestone as the result of an extraordinary amount of teamwork from throughout the Library and our collaborators in Congress and the Government Printing Office,” Karamanis said. “We have been very gratified by the volume of feedback. Most has been positive, and we will continue to improve and update based on suggestions we receive from users.”