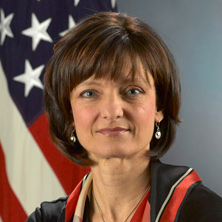 Wired’s Noah Shachtman reports that DARPA Director Regina Dugan will step down from her position to accept a job at Google.

Dugan has served as the agency’s director since 2009 and is the first woman to hold that position. She also worked at the agency from 1996 to 2000, running the famed Dog’s Nose program which focused on the development of an advanced, field-portable system for detecting the explosive content of land mines.

“Regina Dugan’s leadership at Darpa has been extraordinary and she will be missed throughout the Department. We are all very grateful for the many contributions she has made in advancing the technologies that our war fighters depend on. She leaves for an exciting new opportunity and we wish her every success,” said Acting Under Secretary of Defense for Acquisition, Technology and Logistics Frank Kendall in a statement referenced by Wired.

Dugan is expected to leave within the next few weeks with Deputy Director Ken Gabriel expected to serve as acting director.

Dr. Regina E. Dugan was sworn in as the 19th director of the Defense Advanced Research Projects Agency (DARPA) on July 20, 2009. Founded in 1958 as a response to the Soviet Union’s launch of Sputnik, DARPA’s mission is to prevent and create strategic surprise. From its founding more than 50 years ago to current day, this mission implies one imperative for the Agency: radical innovation for national security. Today, DARPA is the principal agency within the Department of Defense for research, development, and demonstration of high-risk, high-payoff projects for the current and future combat force.

Experienced in counterterrorism and defense against explosive threats, Dr. Dugan first served the Nation as a DARPA program manager from 1996 to 2000. She directed a diverse $100 million portfolio of programs including the Dog’s Nose program, which focused on the development of an advanced, field-portable system for detecting the explosive content of land mines. In 1999, Dr. Dugan was named DARPA Program Manager of the Year, and, in 2000, she was awarded the prestigious Bronze deFleury medal by the Army Engineer Regiment. Other recognition includes the Office of the Secretary of Defense Award for Exceptional Service and the Award for Outstanding Achievement.

Dr. Dugan’s contributions to the United States military are numerous. She led a counterterrorism task force for the Deputy Secretary of Defense in 1999 and, from 2001 to 2003, she served as a special advisor to the Vice Chief of Staff of the Army, completing a Quick Reaction Study on Countermine for Enduring Freedom. The results of this study were subsequently briefed to joint senior military leadership and implemented in the field.  Additionally, she has participated in wide-ranging studies for the Defense Science Board, Army Science Board, National Research Council, and the Science Foundation, and sat on the Naval Research Advisory Committee and the Defense Threat Reduction Agency and Technology Panel.

Widely recognized for her leadership in innovation and technology development, Dr. Dugan has been featured in The New York Times, The Wall Street Journal, The Washington Post, Prism, Forbes, Fast Company and Science News, among others; and has delivered keynote remarks at events as diverse as All Things Digital (D9), FORTUNE Most Powerful Women Summit, e.g., Washington Post Live, MIT Distinguished Lecture, AIA Board of Governor’s meeting, Defense Manufacturing Conference, and SPIE Defense, Security, and Sensing. In 2012, her TED talk was one of the top 10 trending topics on Twitter worldwide.  In 2011, she was named a Tech Titan by Washingtonian Magazine and was awarded an honorary Doctorate of Science from California State University, Fullerton, only the 16th such honorary degree given since the university’s founding in 1957.

Dr. Dugan obtained her doctoral degree in mechanical engineering from the California Institute of Technology and her master’s and bachelor’s degrees from Virginia Tech. She is the sole inventor or co-inventor on multiple patents and patents pending and the co-author of Engineering Thermodynamics, 1996.  Dr. Dugan is the first female director of DARPA.