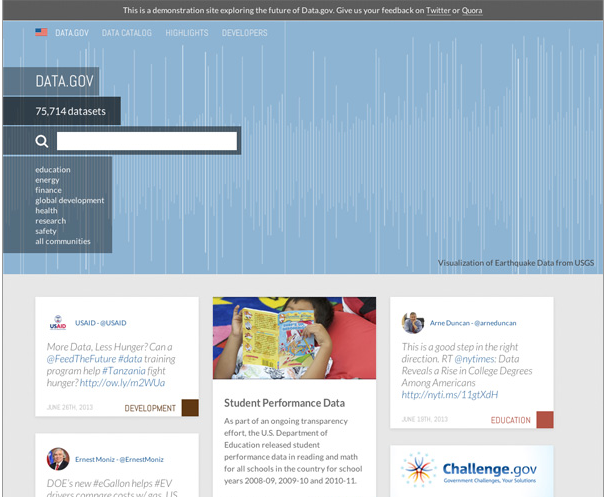 Data.gov is going through some major changes — meet Next.Data.Gov.

It has been a busy week so far for the White House — and it’s only Tuesday.

Next.Data.Gov is still very much a work in progress, but was launched this week in anticipation of its completion and as a maneuver to encourage citizen participation in building it.

Visually, the site will also differ from the current Data.gov. Using an innovative open-data-powered image for the masthead, it’s expected to change every so often to demonstrate the different ways open data can be illustrated and implemented. For now, it’s a U.S. Geological Survey earthquake plot showing the magnitude of earthquakes over the past week.

The team found many sources outside of Data.gov were featuring these data sets, often over Twitter or blogs, and decided to feature a stream on the new site, which allows for data communities to see how their data sets are affecting the public.

This latest development is in line with President Barack Obama’s recent remarks at the White House, in which he highlighted the importance of opening up data sets to the public. In his speech, the president noted the success of Data.gov, and its ability to create jobs and promote entrepreneurship.

The Data.gov site will remain up and running while the team continues work on Next.Data.Gov. Uusers can expect regular design and software updates.