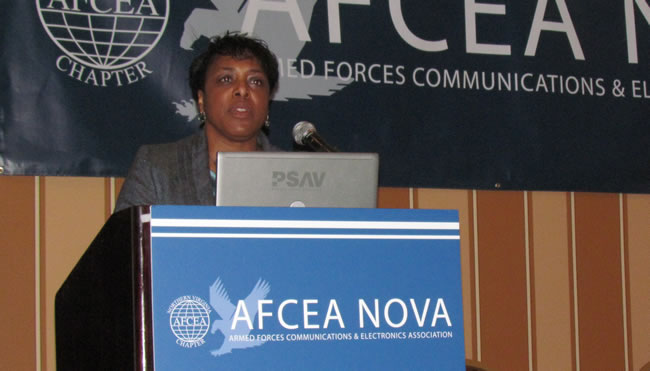 With the Defense Information Systems Agency moving to Ft. Meade this year, agency small business director Sharon Jones says there was an impression that a new flood of opportunities would open up within the agency.

The reality: Not so much.

“People thought it was like a new Wal-Mart coming to town and bringing tons of stuff with it, but in reality we’re still government and not that much has changed because of the move – although our new home is gorgeous,” Jones said Thursday at AFCEA Nova’s DISA Small Business Breakfast at the Sheraton Premiere in Vienna.

So yes, things are staying the same, which actually might not be bad for the small business community. Jones said the agency spent more than $1 billion each of the past two years on small business prime contracts ($1.2 billion in FY10 or 26% of the agency’s spend – and more than three times what the agency was spending with small business a decade ago).

She says that recent budget cuts will make it hard to reach $1 billion spent with small business for a third straight year will be tough, but she’s optimistic it can be done. In fact, the agency has a slightly larger small business goal for this fiscal year (27% opposed to 26.2 percent) and is aggressively looking to increase the number of HUBZone certified companies to work with, especially in NAICS code sectors 51 and 54, along with 33.

And while she says that the Department of Defense’s small business procurements have remained relatively flat the past few years, the DoD announced three weeks ago that Andre Gudger will head OSD’s Office of Small Business Programs. He gives the DoD, Jones said, its first small business director in more than two years.