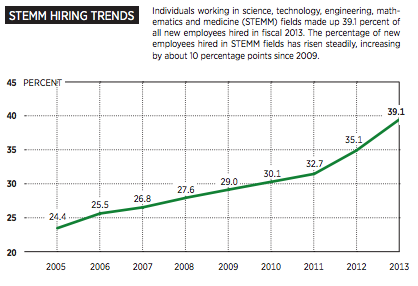 Even though the federal budget is shrinking, putting a damper on government hiring during the last five years, a new report from the Partnership for Public Service paints a picture of a lean, mean workforce bullish on driving efficiency through IT and attracting the next generation of workers to join it.

Nearly 40 percent of all federal hires in 2013 had an educational background in science, technology, engineering and math — referred to as STEM. While a good chunk of those pursued careers in medical, dental and public health fields, Tim McManus, the vice president of education and outreach for PPS, said many took jobs involving the technology backbone of the federal government.

“Clearly there’s a huge emphasis and a huge push to ensure that government is securing its technical infrastructure and I think that’s actually part of that increase in STEM hiring,” McManus said. Despite the report showing a decrease in federal IT hires between 2012 and 2013 of almost 1,400 new employees — something happening in most sectors governmentwide — IT is the seventh most popular occupational group in government hiring, bringing in 4.4 percent of 2013’s total new federal employees.

Even if budgets continue to be slashed, McManus said the IT community should remain a focus for federal hiring. After all, units within agencies, especially those focused on cybersecurity, are demanding more STEM workers than universities can graduate.

“You’re not going to see hiring in STEM shrink, because the way to greater efficiency and effectiveness is oftentimes through systems and structures,” he said. “And you need people to actually develop those. And a lot of that comes from the IT community. On a whole, hiring is down a bit, but for those in the IT field I think there’s a pretty bright future for opportunities in government.”

With that push for an IT-sound government, federal agencies are also looking to balance the age and experience of its workforce. 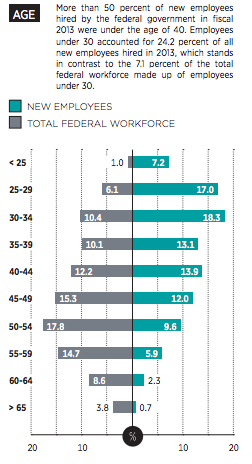 Americans 30 and younger made up just 7.1 percent of the federal workforce in 2013, according to the report, a fraction of the same demographic employed in the private sector. However, 24.2 percent of new agency hires last year fell into the younger-than-30 category, a positive direction toward balancing that private-public “discrepancy,” as McManus called it.

“The federal government strives to have a workforce that is actually representative of the country,” he said. “One of the great signs I saw of this data is a little over 20 percent of all of the new hires were under 30 years old. If you look at the total percent of people under 30 in the U.S. workforce, it equates to about 23 percent.”

McManus said some feds might worry about the lack of experience that comes from replacing the departing Baby Boomers with fresh millennials, but it comes with advantages as well.

“It comes with the plus side of you have different ways to look at solving complex issues,” he said. “And we’re not going to be able to, as a nation, solve complex issues and challenges if we all look at things through the same lens.”

Hiring a younger workforce is only part of the battle, though, and a perhaps easier one compared to retaining that talent. While the federal government has made great strides attracting younger professionals through efforts like the Pathways program, it still has a ways to go in understanding how to adapt to and retain the new generation of employees, McManus said.

“One of the things federal government has to be aware of now is as you’re bringing in younger people who see the world differently and see work differently; are you in fact changing the work environment as well?” he said. “And I think the verdict is still out on that. We’ll have to look a few years down the road at the nearly 25 percent of people under 30 who came into the workforce and see how many of those folks are still around. And it may be okay that they’ve actually gone, but have they had a good experience in government and are they coming back?”

That’s not unknown to the government. The Office of Personnel Management has an extensive plan underway to innovate the federal workforce, understand what it wants out of its work experience and “create a culture of excellence and engagement that will foster higher performance,” which includes attracting millennials, OPM Director Katherine Archuleta wrote in a blog post.

“We’ve done a really good job attracting people into government, but maybe what we haven’t done is retain them, and basically what we’ve done is create a revolving door and we’re not exactly sure why,” McManus said.

Chances are as the government attracts those younger professionals, many of them will be the ones with backgrounds in STEM headed for the IT community. And the intent, McManus said, will be to keep them there to flourish.