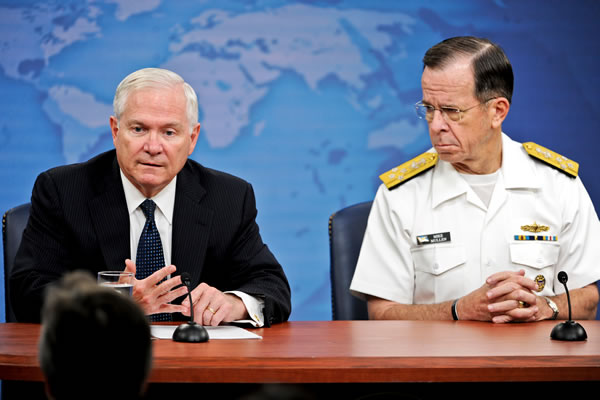 Secretary of Defense Robert Gates outlined the framework for the comprehensive financial review the department will undertake as it looks to make significant budget cuts as part of President Obama’s goal to save $400 billion in government spending over the next 12 years.

“The new comprehensive review will ensure that future spending decisions are focused on strategy and risks, and are not simply a math and accounting exercise,” Gates said at a Pentagon press briefing with Joint Chiefs of Staff Chairman Mike Mullen. “The overarching goal will be to preserve a U.S. military capable of meeting crucial national security priorities even if fiscal pressure requires reductions in the force’s size. In my view, we must reject the traditional approach of applying across- the-board cuts, the simplest and most politically expedient approach both inside this building and outside of it.”

He continued, “That kind of an approach preserves overhead and maintains force structure on paper. It results in a hollowing-out of the force from a lack of proper training, maintenance and equipment. We’ve been there before, in the 1970s and in the 1990s.”

To do this, Gates said, the review should develop specific program options that can be categorized in four bins:

“In the end, this process must be about identifying options for the president and the Congress, where the nation is willing to accept risk in exchange for reduced investment in the Department of Defense,” Gates said. “The defense comprehensive review will be jointly led by the director of cost assessment and program evaluation, the undersecretary of defense for policy and the chairman of the Joint Chiefs of Staff.”

With those cuts in mind, though, Gates cited several areas where the department will need to spend in the coming decade and need to find the resources available to do so, including the need for a fifth generation fighter, a new tanker, ballistic missile submarines and the resetting of the Army – and to a lesser extent – the Marine Corps after the war in Afghanistan concludes.