The General Services Administration has successfully moved its employees to a cloud-based email system, becoming the first federal agency to have its email system completely in the cloud, CIO Casey Coleman tells FedScoop.

And the project goes far beyond the scope of GSA’s nearly 12,000 employees, but to the federal government as a whole: The work and progress of this project will be used in the awarding of GSA’s $2.5 billion email-as-a-service blanket purchase agreement procurement in the coming months, Coleman said.

“Cloud computing is the way of the future and we want to be an advocate and an informed expert to help other agencies down a similar path,” Coleman said.

GSA’s new email system was installed by a team led by Unisys using Google’s Apps for Government. Acumen and Tempus Nova also teamed on the project that is expected to save the agency $15.2 million over the next five years, roughly half of what the old system would have cost.

A large part of these savings will come from a decrease in the number of costly data centers requiring hardware, software licenses, maintenance, and contractor support, the agency said.

GSA’s move to cloud-based email started in May of 2009 when the agency’s IT leadership expressed a desire to modernize an increasingly outdated email system. The new systems wanted to accomplish four goals: move to a modern system, create an effective collaborative environment, reduce the government management burden and have a system with a full range of security and privacy safeguards.

Martha Johnson gave the go-ahead for the move following her confirmation in February of 2010 and following the search for a vendor, GSA started moving employees – first a group of IT workers in Pittsburgh in March of this year – and then a group of early adopters in April. Finally, the rest of the agency started coming on board in June.

“We could write a whole book on the lessons learned,” Coleman said.

One of the key ones, Coleman said, was empowering GSA employees to engage in the migration. Most of the training was online using webinars and the agency set up a user forum for employees to ask and answer questions among themselves, using the wisdom of the crowd and social media to reduce the spike of demand on the help desk.

The move also gave GSA a look at itself as the move included integrating the army of Blackberrys the agency uses, reflecting its mission as a customer-focused agency with employees that need to be connected at all times.

And, of course, the learning isn’t over. Coleman says the cloud email project continues as the next phase will be migrating necessary messages from the old email system to the new one for future records, along with assisting employees in leveraging other tools available in Google’s Apps for Government platform. 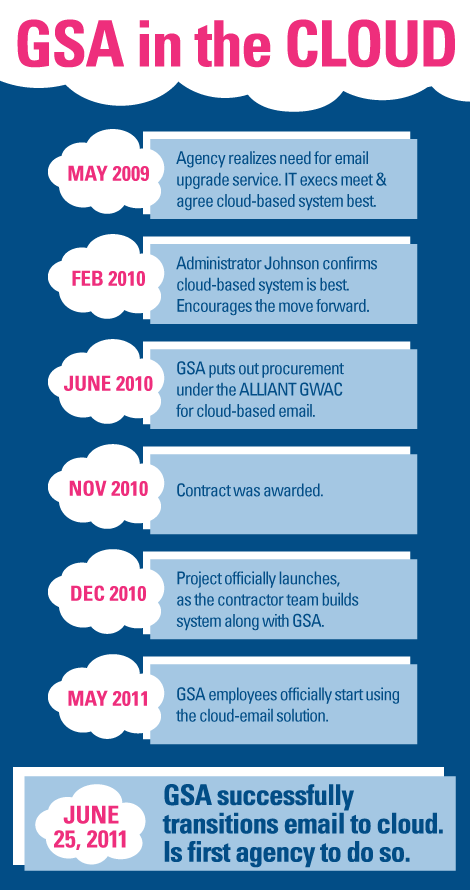