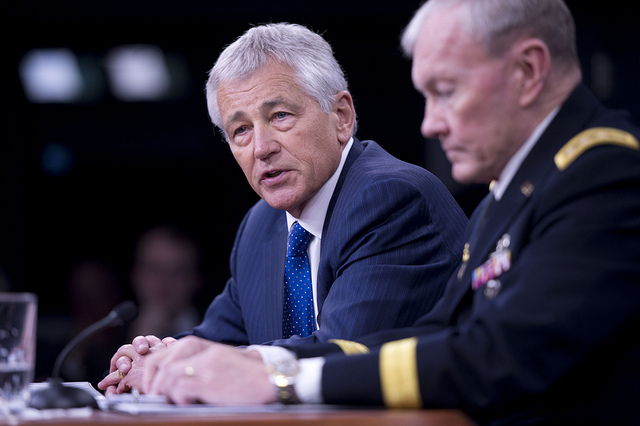 Defense Secretary Chuck Hagel, left, and Chairman of the Joint Chiefs of Staff U.S. Army Gen. Martin Dempsey at the Pentagon discussing the president’s proposed budget for the 2014 fiscal year and the effects of sequestration on the defense budget. (File photo: DOD)

Civilian employees were originally subject to 22 furlough days immediately following sequestration, but that number was sliced to 14 before they could take effect. That number has now been cut again.

According to a memo sent May 14 to all DOD personnel, Hagel said the furloughs will begin July 8 with each civilian employee taking one per week until the fiscal yearend.

“If our budgetary situation permits us to end furloughs early, I would strongly prefer to do so,” Hagel said. “That is a decision I will make later in the year.”

He continued, “Furloughs for 11 days represent about half of the number we had originally planned, reflecting the department’s vigorous efforts to meet our budgetary shortfalls through actions other than furlough. There will be exceptions driven by law and by the need to minimize harm to the execution of our core missions. For example, all employees deployed or temporarily assigned to a combat zone will be excepted from furloughs.”

Hagel said sequestration produced a shortfall of about $30 billion, with another $7 billion to $8 billion in deficits in other accounts.

Hagel and the service chiefs have cut as deeply as feasible into maintenance and training to delay civilian layoffs, the secretary noted.

“We’ve taken it as close to the line as we can, and still [be] capable of protecting this country and this country’s interests around the world,” he said. “We still have a war going on. Unfortunately, we still have casualties. We’ve got a lot of very dangerous, unpredictable places in the world, and I can’t put this country in jeopardy by not factoring that in, in the end, as the overall most significant responsibility, as well as treating our people right, as treating our people fair.”