Defense Secretary Chuck Hagel, concerned with the deterioration of the military’s readiness and technological edge after more than a decade of war and massive budget pressures, announced a sweeping effort Saturday to accelerate the pace of innovation in everything from leadership development to new technologies and weapons systems.

Speaking Saturday at a defense forum hosted by the Ronald Reagan Presidential Library, Hagel said Deputy Secretary of Defense Robert Work has been tasked with overseeing the new Defense Innovation Initiative, which he described as “an initiative that we expect to develop into a game-changing third ‘offset’ strategy.”

The ambitious plan comes as the Pentagon faces a very real possibility of a return of sequestration-level budget cuts as modern adversaries, such as China and Russia, continue to increase military spending on technologies designed specifically to counter U.S. military strengths.

On the technology front, the centerpiece of the new innovation initiative will be a so-called Long-Range Research and Development Planning Program that will help “identify, develop and field breakthroughs in the most cutting-edge technologies and systems – especially from the fields of robotics, autonomous systems, miniaturization, big data and advanced manufacturing, including 3-D printing,” Hagel said. This program will run into the next decade and beyond, he said.

“In the near-term, it will invite some of the brightest minds from inside and outside government to start with a clean sheet of paper, and assess what technologies and systems DOD ought to develop over the next three to five years and beyond,” Hagel said.

Hagel acknowledged the changing tech innovation landscape and alluded to a likely expansion of the Defense Department’s contracting universe to include non-traditional system providers. “We all know that DOD no longer has exclusive access to the most cutting-edge technology or the ability to spur or control the development of new technologies the way we once did. So we will actively seek proposals from the private sector, including those firms, and from those firms and academic institutions outside DOD’s traditional orbit,” Hagel said.

“America does not believe in sending our troops into a fair fight,” Hagel said. “But that is a credo we will not be able to honor if we do not take the initiative and address these mounting challenges now. DOD must continue to modernize our nation’s capabilities and sustain its operational and technological edge. And we must do so by making new, long-term investments in innovation.” 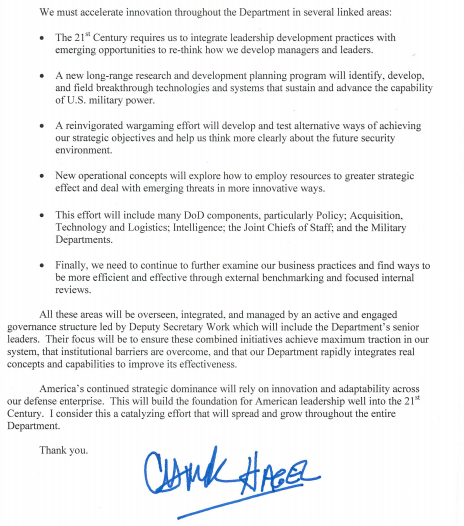