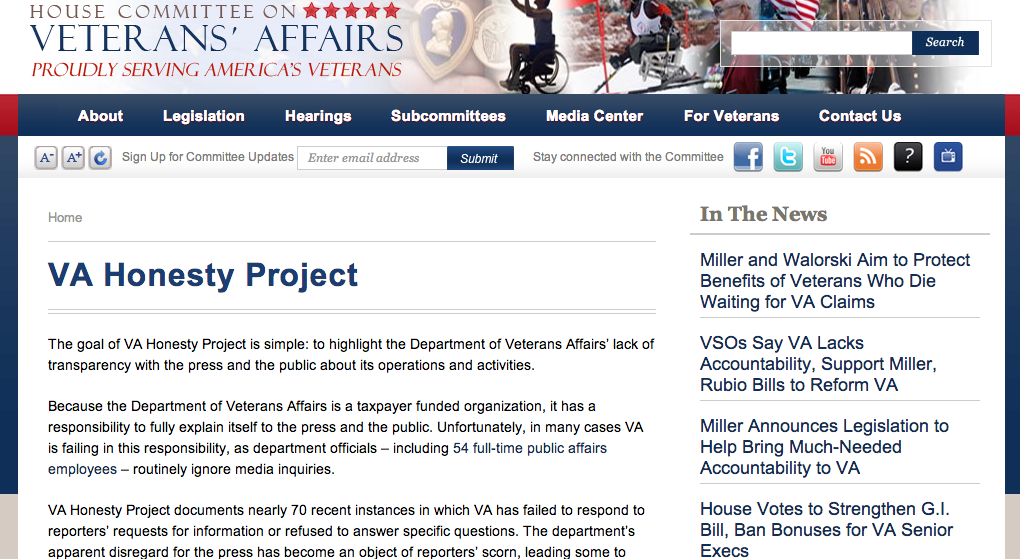 The House Committee on Veterans’ Affairs today launched a website dedicated to documenting what it characterizes as a “lack of transparency” at the Department of Veterans Affairs.

Known as the VA Honesty Project, the website is keeping a running tab on dozens of incidents in which VA allegedly refused to provide information to journalists and the public. The incidents range from the massive data breaches at the agency to questions about patient safety at various VA hospitals.

The “VA Honesty Project documents nearly 70 recent instances in which VA has failed to respond to reporters’ requests for information or refused to answer specific questions,” the site states. “The department’s apparent disregard for the press has become an object of reporters’ scorn, leading some to openly accuse VA of ‘thumbing their nose at us’ and others to write entire articles focusing on VA’s stonewalling tactics.”

“With 54 full-time public affairs employees, VA’s media avoidance strategy can’t be anything other than intentional,” Rep. Jeff Miller, R-Fla., chairman of the House Committee on Veterans’ Affairs, said in a statement. “What’s worse, the tactic leaves the impression that department leaders think the same taxpayers who fund the department don’t deserve an explanation of VA’s conduct. By keeping a running record of VA’s attempts to stonewall the press, we hope to convince the department to put a renewed focus on being responsive and transparent with the media so America’s veterans and taxpayers can get the answers they deserve.”

A spokesperson for VA said in an email to FedScoop that VA tries to provide accurate and timely information to the public and to veterans and their families.

“The public affairs office at VA headquarters responds to thousands of media queries each year, and constantly strives to improve to provide reliable information quickly,” the VA spokesperson said. “VA also communicates with hundreds of thousands of veterans and those who care about veterans through one of the most active social media operations in the federal government. We understand and respect the media’s important role, and we work to ensure veterans understand our commitment to provide them the services and benefits they have earned and deserve.”

A VA official, speaking on background, said as a health care provider VA is bound by privacy laws “including the Health Insurance Portability and Accountability Act, and there may be times where our commitment to transparency is outweighed by the importance of protecting a patient’s privacy.”

A source on Capitol Hill, who spoke to FedScoop on condition of anonymity because they were not authorized to discuss the website, said none of the examples listed on the website would have constituted a HIPAA violation had VA responded to inquiries by journalists.