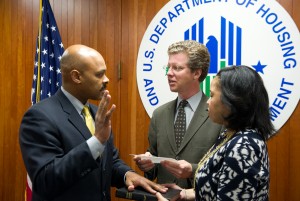 Maurice Jones was sworn in last Wednesday as deputy secretary for the Department of Housing and Urban Development.

Jones, who was confirmed by the Senate on March 29, will be charged with managing the department’s day-to-day operations, including a $47 billion operating budget and more than 8,900 employees.

“Maurice has one of the strongest public and private sector track records I’ve seen for building consensus and solving big problems,” said HUD Secretary Shaun Donovan. “As we continue to confront our current housing challenges, HUD will certainly benefit from Maurice’s intellect, his proven management experience and his great people skills.”

“President Obama and Secretary Donovan have blessed me with the opportunity to join HUD during this critical period when we continue to support a fragile recovery from an historic housing crisis,” said Jones. “I’m ready to help continue transforming an organization charged with moving beyond the yesterday’s experiences to tackle today’s challenges and those we’ll face tomorrow.”

Jones most recently worked in Norfolk, Virginia as President of Pilot Media, the largest print and digital organization in Hampton Roads. Pilot Media’s businesses include The Virginian-Pilot newspaper, Pilot Interactive and Targeted Publications and Media.  Jones served as President and Publisher of The Virginian-Pilot, the locally owned and managed newspaper founded in 1865.

Jones joined Landmark Media Enterprises, owner of Pilot Media, in 2005, serving as Vice President of the Landmark Publishing Group, consisting of multiple newspapers including the News & Record in Greensboro, NC; The Roanoke Times; The Capital Gazette in Annapolis, MD; and Landmark Community Newspapers, Inc., based in Shelbyville, Ky. In 2006 Jones became the Vice President and General Manager of Pilot Media and in 2008 he became president and publisher of The Virginian-Pilot.

A Kenbridge, Virginia native, Jones also served as commissioner of the Virginia Department of Social Services and deputy chief of staff to then-Virginia Governor Mark Warner.  At the U.S. Treasury Department, Jones was special assistant to the general counsel and he also served as legal counsel to the Community Development Financial Institutions (CDFI) Fund and as director of the fund during the Clinton Administration.  Jones also worked for the law firm of Hunton & Williams in Richmond, Virginia and he was a partner at a Partner in Venture Philanthropy Partners, a firm that invests millions in the Washington, DC metropolitan area to assist low-income children.

Jones graduated from Hampden-Sydney College in Hampden-Sydney, Virginia and attended Oxford University in England on a Rhodes scholarship. He later earned a law degree from the University of Virginia.