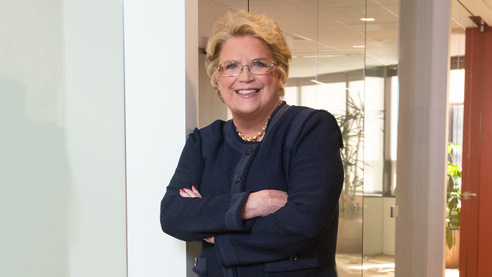 In one of her last official appearances as president and CEO of BAE Systems Inc., Linda Hudson — the so-called “first lady of defense” — issued a harsh review of America’s performance in cultivating its future science, technology, engineering and mathematics leadership.

“With U.S. 15-year-olds today ranking 25th in math skills, I fear the likelihood of some day seeing an end to America’s winning record in technological leadership becoming all too possible,” Hudson said during a Jan. 30 farewell speech hosted by the Northern Virginia Technology Council. “Let’s face facts, we have seen America’s science and math report card and we have fallen off the honor roll.”

Hudson announced her retirement last August. She will be succeeded by Jerry Demuro, who will take the helm effective Feb. 1.

But in her speech to hundreds of technology leaders outside the nation’s capital, Hudson outlined her frustration trying to find, recruit and retain top STEM talent and warned that “the lifeblood of aerospace and defense” is quickly spilling away.

Hudson said she sees two growing gaps that are cause for concern. “A STEM education gap between the U.S. and major economic players around the world, and perhaps even more alarming, a gap right here at home between American men and women,” she said.

Of particular concern to Hudson is the drop in the number of U.S. students who have shown and interest in pursuing STEM degrees. According to Hudson, nearly 75 percent of students receiving Ph.D.s from U.S. engineering schools are not U.S. citizens.

“This end of the talent pool is off limits to me,” Hudson said. “I need qualified U.S. citizens capable of getting a security clearance.”

And the continued, worsening gender gap in STEM may be contributing to that shortage, according to Hudson. From 2004 to 2009, the number of male engineering graduates increased by 11 percent. But the number of women graduating with engineering degrees dropped more than 5 percent, she said.

“Female students are increasingly turning away from pursuing STEM degree,” Hudson said. “That’s a real problem, especially given that today, women make up a growing majority of college enrollment.”

Hudson was the first woman to be named CEO of a major U.S. defense contractor when she took the helm of BAE in 2009. And while there remains a debate about the extent of the shortage of STEM workers in the U.S., Hudson said her experience “paints an altogether different picture” of the reality facing the nation’s defense industry. Although the birth of the app and the iPhone has been “good for Apple, Facebook and Google, it does not bode particularly well for aerospace and defense,” she warned.

“The reservoir of STEM-educated U.S. labor is insufficient to meet the needs of today’s industry, particularly in critical national security jobs,” Hudson said.

“Today’s STEM grads want flexibility and transparency,” Hudson said. “They don’t like arbitrary hierarchies, fixed work schedules and red tape. And many perceive defense and aerospace as a high-tech dinosaur populated by legions of salary drones sitting in oceans of cubicles. There’s some truth to that. We must change the way we work and embrace the changing demographics.”

For Hudson, if the federal government and the defense industry are serious about the STEM crisis, they must be willing to embrace change and find a way to tap into the available talent pool.

“We must be willing to embrace and develop obvious but overlooked historically unconventional sources of talent — women, minorities and immigrants,” Hudson said.