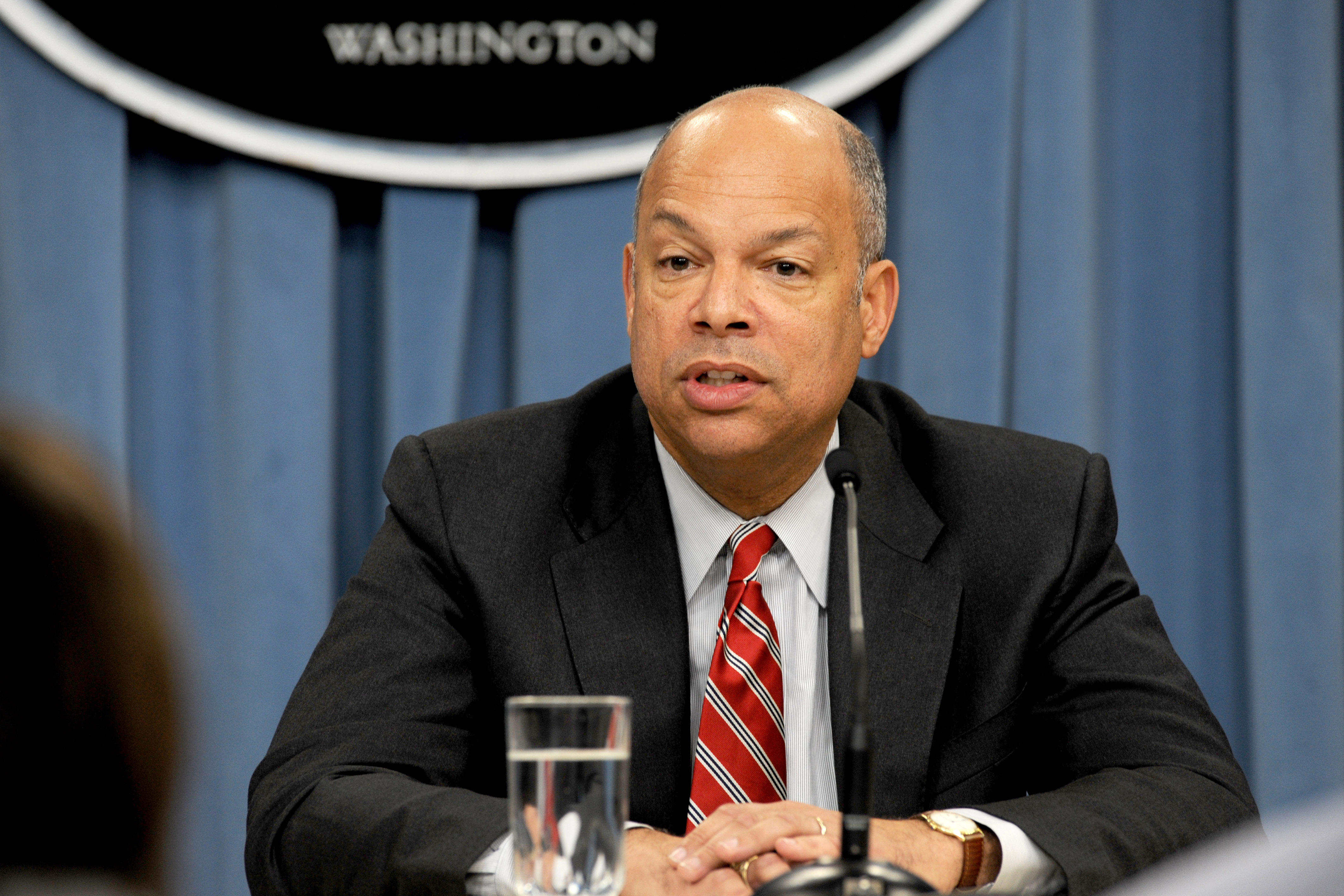 The Department of Homeland Security has lawyered up — again.

President Barack Obama today announced the nomination of Jeh Johnson to be the next secretary of DHS, replacing Janet Napolitano, who left in September to become president of the University of California.

Johnson, if confirmed, will become the fourth DHS secretary and the fourth lawyer to hold that position.

“In Jeh Johnson, we have the right person to continue this important work” at the DHS, Obama said, speaking at a Rose Garden press briefing.

“He helped design and implement many of the policies that help keep the United States safe. He’s been there, in the Situation Room, at the table,” Obama said, describing Johnson as a cool and calm leader.

Johnson, 56, is a native of New York and was in Manhattan on Sept. 11, 2001, an experience he credited with helping him make the decision to accept the job as DHS secretary.

“I was not looking for this opportunity,” Johnson said. “But when I received the call, I could not refuse it. “I love this country. I care about the safety of our people.”

Johnson’s appointment is being praised by many on Capitol Hill, primarily out of a sense of relief the administration has finally taken action to fill the critical cabinet position.

“I am pleased that the administration has finally taken seriously its obligation to fill leadership positions at DHS, and I look forward to hearing Mr. Johnson’s vision for improving the department’s operations, morale and creating a more unified agency,” said House Homeland Security Committee chairman Rep. Michael McCaul, R-Texas. “In order for DHS to carry out its core mission of protecting the American people — from our border and cyber security to the growing threat of terrorism — the department needs a strong leader with a commitment to enforcing the law. Even with this prospective nominee, over 40 percent of senior leadership positions at DHS are either vacant or have an ‘acting’ placeholder … and these important positions must be filled in order to fill the holes in our homeland security.”

But Johnson’s appointment has also come as a surprise. A career lawyer with no particular expertise in homeland security or disaster response, Johnson’s nomination cuts against the grain of conventional wisdom that had placed former Coast Guard Commandant Adm. Thad Allen, Transportation Security Agency Director John Pistole, and New York Police Commissioner Ray Kelly as the three likely frontrunners for the job.

“This is not the pick I would have liked to have seen, but it’s OK,” said a source on Capitol Hill, who spoke to FedScoop on condition of anonymity because they were not authorized to speak publicly.

Johnson’s background as the Pentagon’s senior legal counsel, and as a federal prosecutor before that “doesn’t necessarily make him uniquely qualified, but management is a huge part of the job at DHS,” the source said.

“Looking back, every DHS secretary has been a lawyer. And in some ways, this pick is analogous to the Chertoff years,” said the source, referring to President George W. Bush’s pick of Michael Chertoff to replace Tom Ridge. Chertoff, also a former federal prosecutor, was a relatively unknown entity in Washington homeland security circles at the time.

“I do not believe we necessarily need lawyers to run DHS,” he said. “Having them on staff is important as they provide much needed legal guidance. But the secretary should have leadership [and] practitioner experience. Unfortunately, selection for this type of position is politically driven as well. Jeh Johnson may have been selected more for his political ties [and] affiliation rather than his background.”

FedScoop’s source on Capitol Hill acknowledged the political nature of the appointment, but added the Johnson’s close relationship with the president is probably a good thing.

“You always want a good person [in the job],” the source said. “At the same time, the president has the right to pick his own people. And the fact that he has the president’s ear is a good thing.”

But Johnson is also seen by some as having the right mix of talents for DHS — a solid legal understanding of the issues facing the U.S. counterterrorism effort, combined with experience managing a large organization and a sophisticated grasp of the legal dimensions surrounding cybersecurity, which has become a central focus of the department.

“I don’t know that you need a lawyer to run DHS, but … you need someone who is experienced in policy formation and execution. Jeh Johnson certainly fits that bill,” said retired Navy Adm. Jamie Barnett, co-chair of the Telecommunications Group at Venable LLP, a Washington, D.C.-based law firm, and the former chief of the Public Safety and Homeland Security Bureau of the Federal Communications Commission.

“DHS is so complex, with 22 agencies and all of the laws that attach to those agencies, and I don’t even remember the number of congressional committees with jurisdiction,” Barnett said. “It does not hurt to have an attorney who has been at the other very complex, big-budget agency to grapple with those DHS complexities.”

Callander Turner, executive director of the Washington Homeland Security Roundtable, a nonprofit industry group, said she has no reservations about Johnson’s abilities.

“Serving as the secretary of DHS is a very complex job,” she said. “It is the Washington Homeland Security Roundtables’ belief that the administration has put forward a well-qualified nominee.”

FedScoop’s source on Capitol Hill thinks Johnson may actually be able to improve DHS’ cybersecurity leadership by enhancing the department’s relationship with the Pentagon. The Defense Department is widely seen as being well ahead of DHS in terms of cybersecurity, and a better relationship could benefit DHS.

“Johnson could do wonders for the DOD-DHS relationship,” the source said. “The war on terror isn’t over. And the more I learn about Johnson, the more I realize it’s not all doom and gloom.”

Barnett said Johnson leaves the Pentagon with a very good reputation and respect.

“I suspect that he will be able to engender good cooperation between the two agencies,” Barnett said. “And his knowledge of what is legal in cyberspace may be a particular advantage as DHS steps up to the cyber-challenge.”

Beyond cybersecurity, the challenges facing DHS are massive. From border security to immigration reform, to state and local cooperation and disaster response, Johnson will face a wider array of challenges than he’s been used to at DOD.

“Addressing all of them at once is a monumental task,” Obama said. “I’m confident I could not make a better choice.”