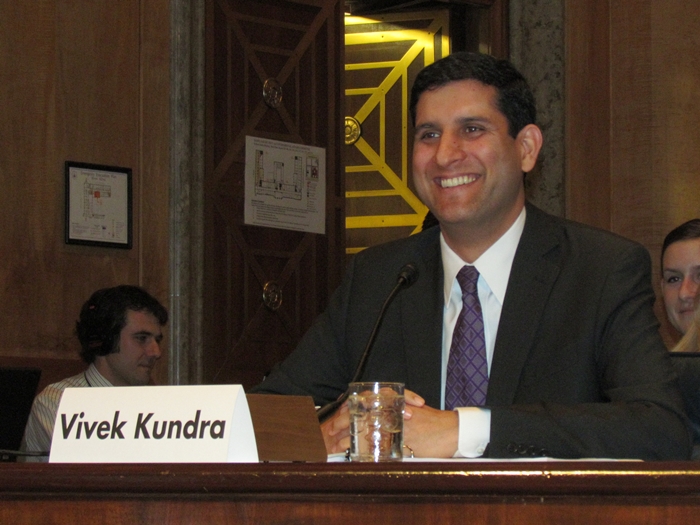 In a little more than five months since implementing its 25-point plan to reform federal technology, the Office of Management and Budget has reviewed more than 50 at-risk IT projects and saved approximately $3 billion in cost by canceling four projects and de-scoping another 11, Federal Chief Information Officer Vivek Kundra said this morning.

Now the bad news: There are still more than 300 projects representing more than $20 billion in investment that are seen as at-risk on the government’s IT dashboard that need to be looked at, said Kundra, speaking at a U.S. Senate Committee on Homeland Security and Governmental Affairs Subcommittee on Federal Financial Management, Government Information, Federal Services, and International Security hearing at the Dirksen Senate Office Building.

“Our challenge isn’t to immediately cut costs, but change the culture of IT investments to prevent these types of investments in the future,” Kundra said.

“This legislation calls for greater transparency when it comes to the cost and performance of our nation’s information technology investments so that the American taxpayer can see how their money is being spent. It also demands that agencies and the Office of Management and Budget be held accountable for a project’s failure and work either to fix them or end them,” Carter said.

McClure pointed to the government’s time and money investments in project management won’t be immediately seen, but show real growth in the future. The same he said for the reduction of federal data centers from more than 2,000 today to less than 800 in five years. Already this year, Kundra said, there are 100 federal data centers scheduled to be consolidated. McClure also pointed to the use of cloud services as showing real cost savings: GSA’s migration to a cloud email system will save $15 million over the next five years while the consolidating 12 data centers to just three will save on average $2 million per year.

“The thing for us is looking at real cost savings and using the TechStat reviews we’ll be able to make sure poorly performing projects are fixed. This will help us drastically improve the service of IT and how it can change the operations of government,” McClure said.

Powner said OMB and GAO need to take a stronger look at duplicative services. Of note, in fiscal year 2011, the government is funding more than 550 financial management projects (at a total cost of $3 billion) and more than 600 human resources systems (at a total cost of $2.5 billion). He says that for OMB’s plan to take greater effect, the government’s IT dashboard needs a slight overhaul as statistics are only updated once per month and agency data is not always accurate with that posted on the dashboard.

“I commend Mr. Kundra for the job he is doing,” Powner said. “It’s obvious that this situation didn’t happen overnight, but so far real progress is being made and will continue to be made with proper oversight.”