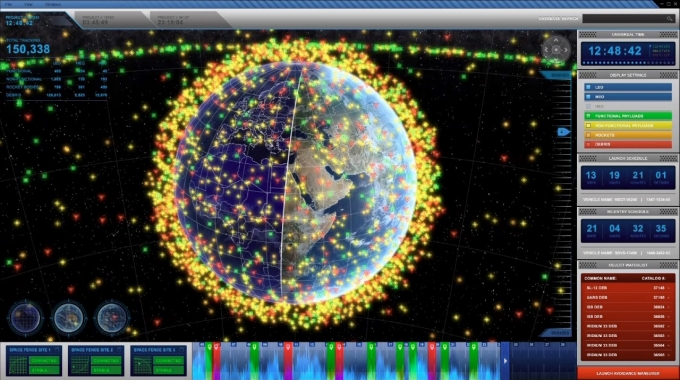 The Air Force announced Monday that Lockheed Martin Corp. will build a new radar system with powerful computing technologies to help protect satellites, spacecraft and Earth from the tens of thousands of pieces of space junk currently orbiting Earth.

The so-called Space Fence program awarded Lockheed a $914.7 million contract to build a ground-based, S-band radar network on the Kwajalein Atoll, along with an operations center equipped with upgraded computers and software, to improve the military’s ability to detect, track, measure and catalogue space debris that poses a threat to critical satellite systems.

“Previously, the Air Force could only track and identify items the size of a basketball,” said Dana Whalley, the Space Fence program manager, in a statement. “With the new system, we’ll be able to identify items down to the size of a softball. This will significantly increase our capability to provide predictive and actionable space situational awareness for the nation.”

The system’s design incorporates a scalable, solid-state S-band radar with a higher wavelength frequency capable of detecting much smaller objects than the Air Force’s current system and without prior knowledge of an object’s existence or location, a process known as cueing. This improves accuracy, quickens response time and expands surveillance coverage.

A massive cloud of debris — with pieces from as small as paint chips to as large as decommissioned satellites and spent rocket boosters — surrounds the Earth and at any given moment could pose a serious threat to military, civil and commercial satellite services.

One of the worst man-made debris clouds was formed Jan. 11, 2007, when the Chinese government launched an interceptor missile during an anti-satellite weapon test that destroyed China’s decommissioned Fengyun-1C weather satellite. The resulting explosion generated more than 3,000 pieces of debris larger than 10 centimeters and an additional 150,000 pieces larger than 1 centimeter. According to a study released in January by the Congressional Research Service, the remnants of this event will likely remain in orbit for at least a century.

But the debris cloud to which the Chinese intercept explosion added was already growing. In fact, it’s grown so fast during the last several decades of human space flight that experts believe it has reached critical mass and may continue to grow uncontrollably in the future.

But the Space Fence is designed to provide assured coverage for objects as small as 10 centimeters at low Earth orbit, between 99 and 1,200 miles above Earth. The system will also support cued searches and uncued surveillance at medium Earth orbit and above. The increased Space Fence sensitivity, coupled with the increased computing capabilities of the Joint Space Operations Center, will produce a more accurate and detailed picture of the space operating environment and associated threats.

“By providing a better picture of the space operating environment, Space Fence will greatly improve the Air Force’s ability to see and understand that battlespace,” Whalley said .

Once fully operational in 2017, the S-band radars of the Space Fence will join the Pentagon’s Space Surveillance Network, which currently tracks more than 23,000 objects as small as the size of a softball in low Earth orbit. Of those, only about 1,100 are active satellites. The rest is space junk.

And even with the existing knowledge gained from the Space Surveillance Network, there remain hundreds of thousands of pieces of debris too small for the system to track and catalog and capable of causing catastrophic damage to spacecraft and satellites. Follow @DanielVerton