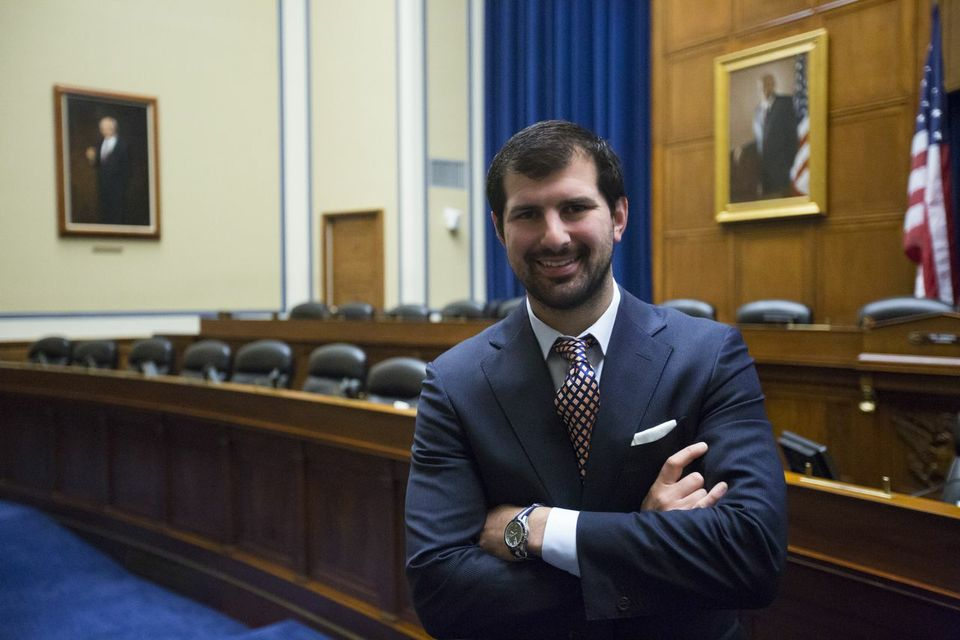 California native Justin LoFranco is the mind behind the digital strategy for the House Oversight Committee and Rep. Darrell Issa.

Justin LoFranco has a captive audience. Halfway through his presentation, he seamlessly starts undressing. Jacket comes off, tie gets undone. As he rolls up his sleeves and leans back against the table in front of the room, his look has transformed from the formal Hill suit and tie. His point? When it comes to lawmakers’ engagement with constituents via social media, you have to change your appearance for your audience.

“It doesn’t mean that the core message has changed or that you’re saying a different fact or believe in something different,” LoFranco, director of digital strategy for the House Oversight Committee and Rep. Darrell Issa, said at the Connected Congress event in August. “It means that you’ve got to get on people’s levels and communicate with them.”

Today a familiar face on Capitol Hill, California-bred LoFranco came to Washington two days after Christmas 2008. He had just spent a year in Italy, teaching English. But being a teacher wasn’t his ultimate goal: After studying political philosophy in college, LoFranco knew wanted to work in politics.

LoFranco didn’t have a job lined up in Washington but by March 2009, he was hired as Issa’s staff assistant. Soon, his role involved special projects and taking on a more Web-focused role. LoFranco, a self-dubbed nerd, had always been quick to pick up new technology. As a kid, he had learned how to code, build a computer and make websites, experience that served him well when he transitioned to Issa’s digital team. When Issa’s director of digital strategy, Seamus Kraft, left, LoFranco was able to step into his shoes.

When the 2012 election came around, LoFranco left Issa’s office to work for the Republican National Committee as a video editor, and then with Romney for President also as a video editor. After the election, LoFranco worked in Rep. Kevin McCarthy’s office, eventually returning in January as Issa’s digital director.

After 4.5 years on the Hill, LoFranco has become a well-known figure — something a former co-worker says has to do with his infectious personality.

“Justin is an ideas person,” said Kurt Bardella, who worked with LoFranco in Issa’s office. “He’s rare in that he’s capable of imagining the big ideas and also capable of executing them.”

These ideas entail not only ways of reaching audiences, but reaching the right ones.

LoFranco and the rest of the digital team are trying to connect with those who work 45 hours a week, use social media and care about their government. They’re not trying to have committee members or Issa stand in front of Corinthian columns and disseminate a complex policy issue for 20 minutes — LoFranco says that’s not the way to reach people.

Instead, he and his team work to condense these issues and make them easier to understand, with shorter videos and infographics.

LoFranco is the “most talented digital person on Capitol Hill,” Bardella said.

However, LoFranco himself credits the rest of the team for the work Issa’s office and the committee have achieved in the digital space.

When Philip Harding, a fellow at Harvard University who organized the Connected Congress panel, asked around for a digital strategy expert in government, he kept getting hearing LoFranco’s name.

“I was trying to find offices that were more receptive to incorporating more technology into governance,” Harding said. “Rep. Issa came up regularly, as did the man behind his digital strategy, Justin.”

Perhaps it has to do with LoFranco’s sharp eye for a digital opportunity. Whether it’s a catchy “Throwback Thursday” Instagram picture, grabbing a flip camera and shooting a quick reaction video after a committee hearing or using Twitter to get a conversation going on an issue, he sees it as an opportunity to illustrate things differently.

LoFranco said keeping a successful online presence is a balancing act. It’s important for members to stay mission-focused while simultaneously loosening their ties and showing personality. The Internet is constantly changing, he said. No one knew what “Throwback Thursday” was three years ago, and it’s the job of digital strategy offices to keep up with those trends.

“Every day, the Internet becomes a more integral part of how we communicate as a country, and a competent and wise digital strategy has to realize that,” LoFranco said. “They have to account for the fact that people don’t communicate in press releases — they communicate on social media.”

And that’s where he comes in as director of digital strategy. He curates all the different ideas and figures out how to make them work.

Friday Kitty embodies just that type of creativity. A brainchild of LoFranco’s, Friday Kitty is a Twitter sensation that features a new picture of a kitten every Friday on Issa’s Twitter account. It has been a hit with not only Issa’s constituents, but many others on Twitter.

It’s that type of creativity Bardella said makes Justin stand out from other people in his party and in his line of work.

“One of the first things I recognized about him is that he will outwork anybody,” Bardella said. “He doesn’t take himself too seriously and isn’t driven by ego — he’s driven by love of the work he does.”

Which ties into why LoFranco wanted to work for government in the first place.

“I came to believe, and still do believe, that government can and should do more for taxpayers with less,” he said. “That we can have an effective government that serves the taxpayers, and is smaller.”

While LoFranco said he can’t be sure exactly where his career will take him, his long-term plans are in politics. He calls it his “responsibility as a citizen” to be as involved in government as possible.

His message for members of Congress using social media though, is more certain: Don’t be afraid of it.

“Social media is scary for a lot of folks who may not understand the potential of it as much as they should,” LoFranco said. “It’s scary when you step out of your shell, when you take the tie off, so to speak. Things become unfiltered, they become unmoderated and that intimidates people, but if the last election proved anything, it’s that more and more people are turning to social media and it’s an effective way to reach people.”

And just like he showed at the Connected Congress panel, LoFranco isn’t afraid to use his creativity to prove a point.