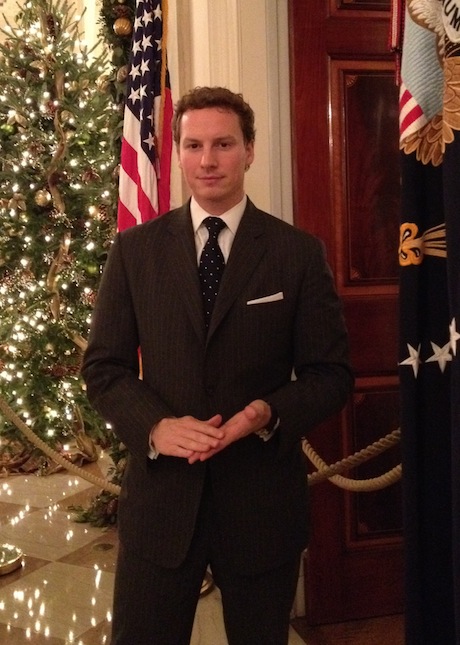 John Farmer, founder of the PIF program, has left the government after three years.

On the last day of the fiscal year, a group gathered in the White House to say goodbye to one of its own.

He’s worn different hats during his three years in the Obama administration, but around the White House, John Paul Farmer has become known as the brains behind the Presidential Innovation Fellows program. Although the idea of bringing entrepreneurs into government had been floated for a while, Farmer spearheaded the program and made it into a wildly popular initiative now in its second year.

Launched in 2012, the program drew substantial interest almost immediately. In the first three weeks applications opened for the inaugural class of fellows, more than 700 applied for 18 spots. In the second round, more than 2,100 people applied for roughly 40 spots. The 61 individuals who make up the two rounds of the PIF program range between the ages 20 and 70.

The PIF program isn’t about the White House creating directives for fellows to work on — agencies are submitting the issues they’re having and the changes they want, and people are specifically applying to work on those issues. The PIF program proves government can get work done in months — not years, Farmer said.

“We want to create pathways for people to actually come here,” he said. “It’s not realistic to have all of the talented people in the country pick up everything and move to D.C. One of the real opportunities is to figure out how we can tap into all the amazing people who aren’t able, whether it’s for family reasons, career reasons, whatever it may be, to actually contribute full time here in D.C.”

Across the nation, there are those “who want to plug in and who want to help and want to contribute,” Farmer said. “I really believe that the Presidential Innovation Fellows program is just the first step.”

“When you do something new in a big organization that hasn’t done anything like this before, there’s a lot of inertia,” he added.

Farmer and the fellows met every week for co-working sessions. These were especially helpful for those projects that crossed over to different agencies, he said. For example, over the last two rounds of fellows, there have been open data initiatives in stretching across a dozen different agencies. They are working on slightly different projects tailored to the different agencies, but commonalities exist between the projects, and having them come together and share best practices and stories has been really helpful, Farmer said.

The first round of fellows worked on projects such as Blue Button, MyUSA and open data initiatives, and laid the groundwork for the sophomore class to work on getting the ideas perfectly functional.

After their stint, some of the fellows from the inaugural class transitioned into various sectors of government or stayed in the area working in the private sector. Marina Martin, a fellow who worked on the open data initiative, was named chief technology officer of the Veterans Affairs Department this summer; Ben Balter has become a government evangelist with GitHub.

“Being in government for a long time, they get a much deeper and richer understanding of the challenges that are faced by the folks doing this all day every day,” Farmer said. “And I think when they go back to wherever they came from, they bring those lessons with them, and bring them deeper level of understanding to the community that they’re re-joining.”

Greg Gershman, first-round fellow who now oversees the MyUSA project, worked closely with Farmer during his time at the White House. Gershman said Farmer acted as one of the best advocates for the MyUSA project and made sure all the bases were covered, whether it meant connecting MyUSA team members with the right people in government or in the private sector.

“Whatever obstacles we came up against, John Paul made it his business to help us get past them to make sure we hit a home run,” Gershman said.

What made the success possible, Farmer said, was his decision to find allies who believed in the program as much as he did. Thanks to those allies, the whole program came together.

However, Peter Levin, VA’s former chief technology officer, said Farmer was the perfect person to realize the PIF program. Not every day is an easy one when working in government, Levin said, and Farmer knows how to take the bad with the good.

“In these projects, you need somebody who’s robust against the ‘nos,’” Levin said. “If the answer was no, John would just work to find another way.”

Levin and Farmer first met when Farmer came over from an investment-banking job to work on U.S. CTO Todd Park’s team. Levin and Farmer collaborated on the first round of fellows—hammering out all the small details that went into making the program success.

Those who have worked with Farmer say his impact on the government and the PIF program will be long lasting. Xavier Hughes, chief innovation officer at the Labor Department, has known Farmer since Hughes began working on the President’s Innovation Cohort two years ago.

“As the creator and driver of the Presidential Innovation Fellows program, John was able to infuse innovation into OPM’s talent recruitment practices and in the process successfully brought in some of the best and brightest minds that America has to offer,” Hughes said. “This resulted in the infusion of cutting-edge innovation across all aspects of government.”

And that’s the end goal for Farmer—giving citizens a chance to become a part of something bigger than themselves. He believes in the untapped potential of the work that can be done when the right minds are connected; whether it’s federal employees connecting with each other or connecting with those outside of government.

The timing of his departure (on the eve of a massive government shutdown) is purely coincidental, he said. After three years, he knew it was time for him to move on. He had contributed as much as he could and made the impact he was hoping for.

“I’ve been really lucky to be able to participate on two really big things over the last few years, first with the healthcare reform and secondly, using tech and innovation to build a better government and strengthen the economy,” Farmer said.