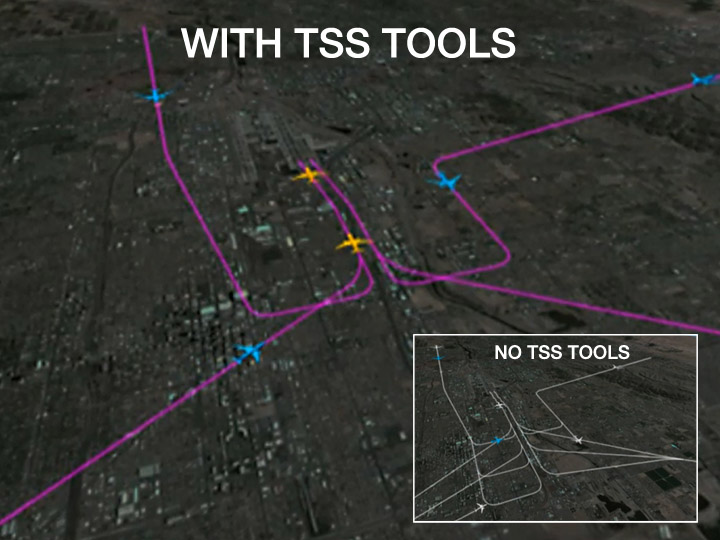 The Terminal Sequencing and Spacing Technology takes into account ways to improve the efficiency of air traffic controlling. Source: NASA

The Federal Aviation Administration is getting some help from NASA to make air traffic management more efficient.

Terminal sequencing and spacing technology, a new computer software tool for air traffic controllers, works to manage the spacing between air traffic as aircraft fly in and out of airports. The tool, created by NASA, is designed to aid planes and save fuel by making the air traffic control process more seamless and efficient. 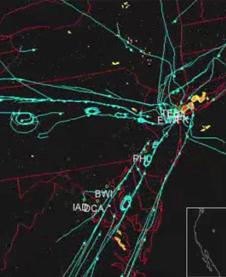 With NextGen, NASA and the FAA aim to improve how air traffic is routed around busy hubs like the northeast.
Source: NASA

To improve efficiency, the software employs performance-based navigation procedures, which according to a NASA release, result in a reduction in controller-pilot communication and fewer flight path changes.

“With TSS, NASA’s aeronautics innovators have delivered to the FAA another valuable tool that will soon benefit our environment, our economy and every individual traveler,” Jaiwon Shin, NASA’s associate administrator for aeronautics research, said in the release.

TSS, according to the FAA, is an airport-centric technology. The software will utilize figurative “corner posts,” which are navigational points in the sky approximately 40 miles from the airport.

“Terminal Sequence and Spacing helps controllers manage aircraft from the four corner posts down to the runway,” a FAA release said.

The new TSS software is an addition to NASA’s Next Generation Air Transportation System. The effort is a multi-agency collaboration to update and improve the way air traffic control works.

According to Leighton Quon, project manager of NextGen, the program is developed by NASA but implemented by the FAA.

Development of TSS began in 2009, piloted by the agency’s Airspace Systems Program, which is a part of the Aeronautics Research Mission Directorate. The first prototype for TSS was developed in 2011,  and since then, the prototypes have been tested in more than a dozen “high-fidelity simulations involving controllers and pilots.”

The FAA will reportedly deploy the tool sometime before 2018 and has yet to secure funding or a test location. The FAA said in the release it expects to make a full investment decision about the TSS project by the end of the year. Funding will be allocated through FAA’s Joint Resources Council.

by Dave Nyczepir • 47 mins ago
Modernization