The number of job postings for cybersecurity positions grew twice as fast as the overall IT job market in 2013, according to a new study.

There were 209,749 national postings for cybersecurity jobs in 2013, according to the latest job market intelligence report by Burning Glass Technologies. The report, released today, comes on the same day the Labor Department reported the U.S. economy added 175,000 jobs last month, exceeding expectations.

“These postings are growing twice as fast as IT jobs overall, and now represent 10 percent of all IT job postings,” according to the study.

The strongest performance nationwide occurred in the professional services sector, which includes technology jobs, according to the Labor Department report. But 38 percent of those jobs are cybersecurity positions, according to Burning Glass.

The demand for cybersecurity professionals comes as the private sector is dealing with unprecedented data breaches. During 2013, a string of high-profile cyber-crimes targeted the networks of at least 17 major retailers and financial institutions, including Target, Nieman Marcus, Visa and NASDAQ.

“The demand for cybersecurity talent appears to be outstripping supply,” said Matt Sigelman, CEO of Burning Glass. “In 2013, U.S. employers posted 50,000 jobs requesting a Certified Information Systems Security Professional, recruiting from a pool of only 60,000 CISSP holders. This is a huge gap between supply and demand.”

The top five cities for cybersecurity job postings were Washington, D.C., New York, San Francisco/San Jose, Chicago and Dallas. There were 23,457 job postings for Washington, D.C., an increase of 90 percent between 2007 and 2013. But the largest percentage increase since 2007 occurred in Atlanta, which last year had 5,883 openings. 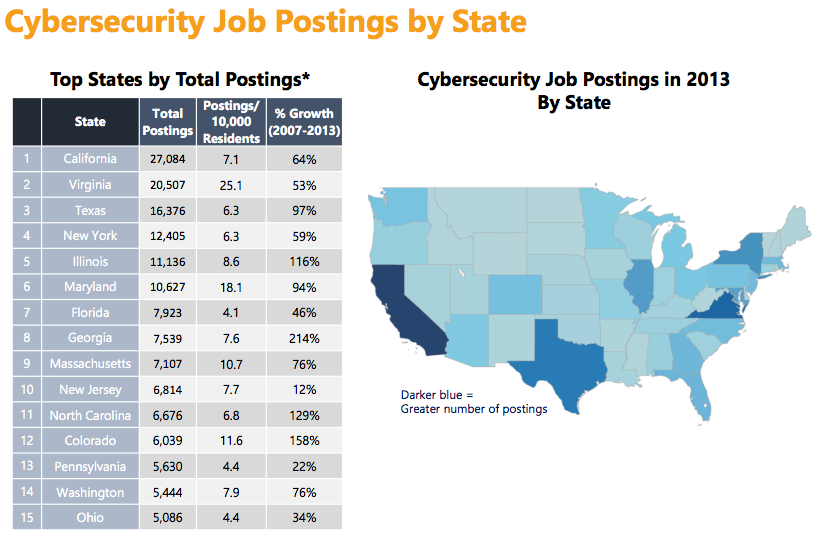