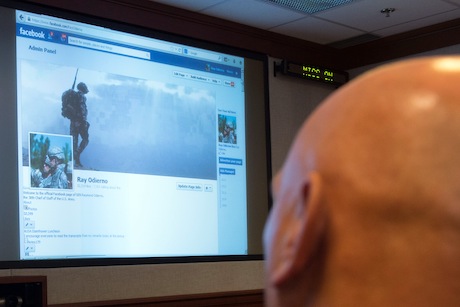 Gen. Ray Odierno held his first virtual town hall, answering questions about the looming threat of a government shutdown and its consequences.

On Sept. 24, the Army’s chief of staff told the forum a complete government shutdown could mean soldiers and Army civilians get paid later than normal.

“Soldiers will be required to work and will be paid, but it could be delayed depending on Congress’ decision,” he wrote.

The hour-long town hall was held through Odierno’s Facebook page and received more than 200 questions and comments.

There is a “good chance” the number of soldiers could decrease to 420,000 in the event of a full sequester, Odierno said. During the height of the conflicts in Iraq and Afghanistan, the active-duty Army had as many as 570,000 soldiers.

“We have to take a balanced approach, which allows us to ensure that we sustain the right end-strength with the right amount of readiness, [while] still being able to invest in future modernization of the force,” he said.

In addition to sequester-related questions, Odierno addressed issues including family programs, the reduction of the Army, mental health counseling, Syria and the best way to develop a physical readiness training program.

“Physical fitness is one of the most important factors for our success,” Odierno said.

Following the event, Odierno said the town hall had been helpful to him and he appreciated the variety of participants.

“That’s what I want and that’s why I believe town halls are so important,” he wrote.

by Billy Mitchell • 11 hours ago
Cyber