If you’re a furloughed fed, you probably know exactly how many days you’ve been out of work. But if you want to know the minutiae of the shutdown, several websites are now zeroing in on the details of the government closing its doors.

The private sector has taken a major hit during the shutdown, but the shutdown of government websites and data sets has left a void for entrepreneurs to fill.

Enigma, an online company that takes public sector data sets around the world and makes them easily available, launched a real-time government shutdown page. Marc DaCosta, the company’s co-founder, said the site began as a weekend project for one of Enigma’s programmers and has since grown.

The site shows in real-time how long the shutdown has lasted, estimated unpaid salary and estimated unpaid WIC food vouchers. It also breaks down the furloughed employees by their department and the reason for furlough through visualizations.

DaCosta said the repercussions of shutting down government websites are widespread.

“It’s quite incredible that places like the Bureau of Labor Statistics and other large macroeconomic data suppliers which provide all types of information are down,” he said. “For people in those data-driven niches who use that information, all of a sudden their lights are out.”

The site details the government services affected by the shutdown, categorized by their status; halted, at risk and functioning. Enigma has labeled federal open data as “at-risk.” The shutdown has halted central open data services including the Census Bureau and Data.gov.

Enigma has been working with journalists and researchers to create a resource of government data as it continues to change, and index agencies’ contingency plans and federal employee salary data.

GovUpTime.com is another site born in the wake of the government shutdown.

G.S. McNamara, founder of Incless, LLC, began experimenting with some code a few days into the shutdown and created the site with some friends. GovUpTime.com visualizes the time passed since the shutdown and the labor time lost from the 800,000 furloughed employees. However, it puts particular emphasis on the service level. 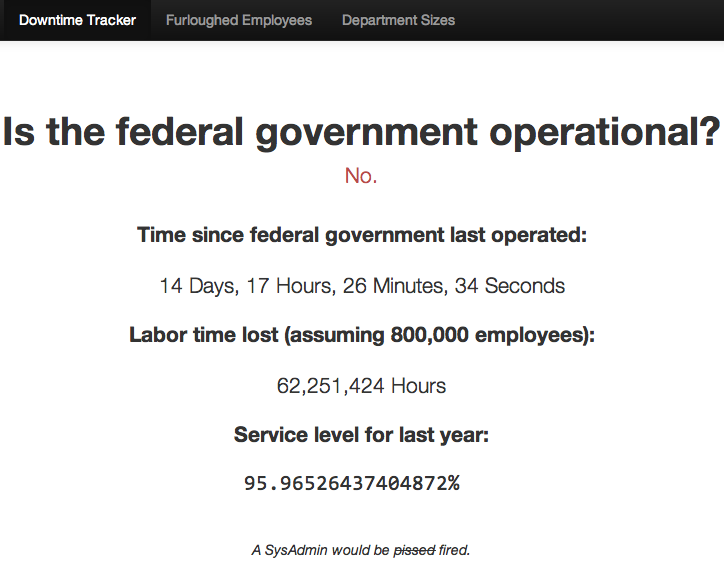 The calculated service level for the past year, according to GovUpTime.com.

“Any commercial company has to guarantee they’ll be online 99.999 percent of the time or however long,” McNamara said. “And when those companies violate an agreement, they have to give a refund. It should be no different in the government.”

The site features a real-time service level indicator for the past year, which is constantly decreasing.

The shutdown has done more than affect just furloughed workers: it’s slowing down business, McNamara said. Those who want to start a new business can’t talk to the Internal Revenue Service, developers don’t have access to data, access to education services has been paused.

GovUpTime is expected to see more additions to the site. In the less than two weeks it’s been up, the site has had more than 45,000 visitors and substantial input from other coders.

Not bad for a site that, according to McNamara, was set up on a whim.