Secretary of Defense Chuck Hagel on Wednesday said the Pentagon will cut its headquarters budget by 20 percent, a cost-savings measure that will trim about $1 billion over the next five years through reductions in civilian and contractor jobs.

The budget cuts, scheduled to begin in 2014, are a tiny fraction of the $500 billion in overall cuts mandated over the next decade by sequestration. But they will impact primarily civilian and contractor jobs, Hagel said. And according to a Pentagon fact sheet, the new budget and organizational changes will take place whether or not sequestration continues. 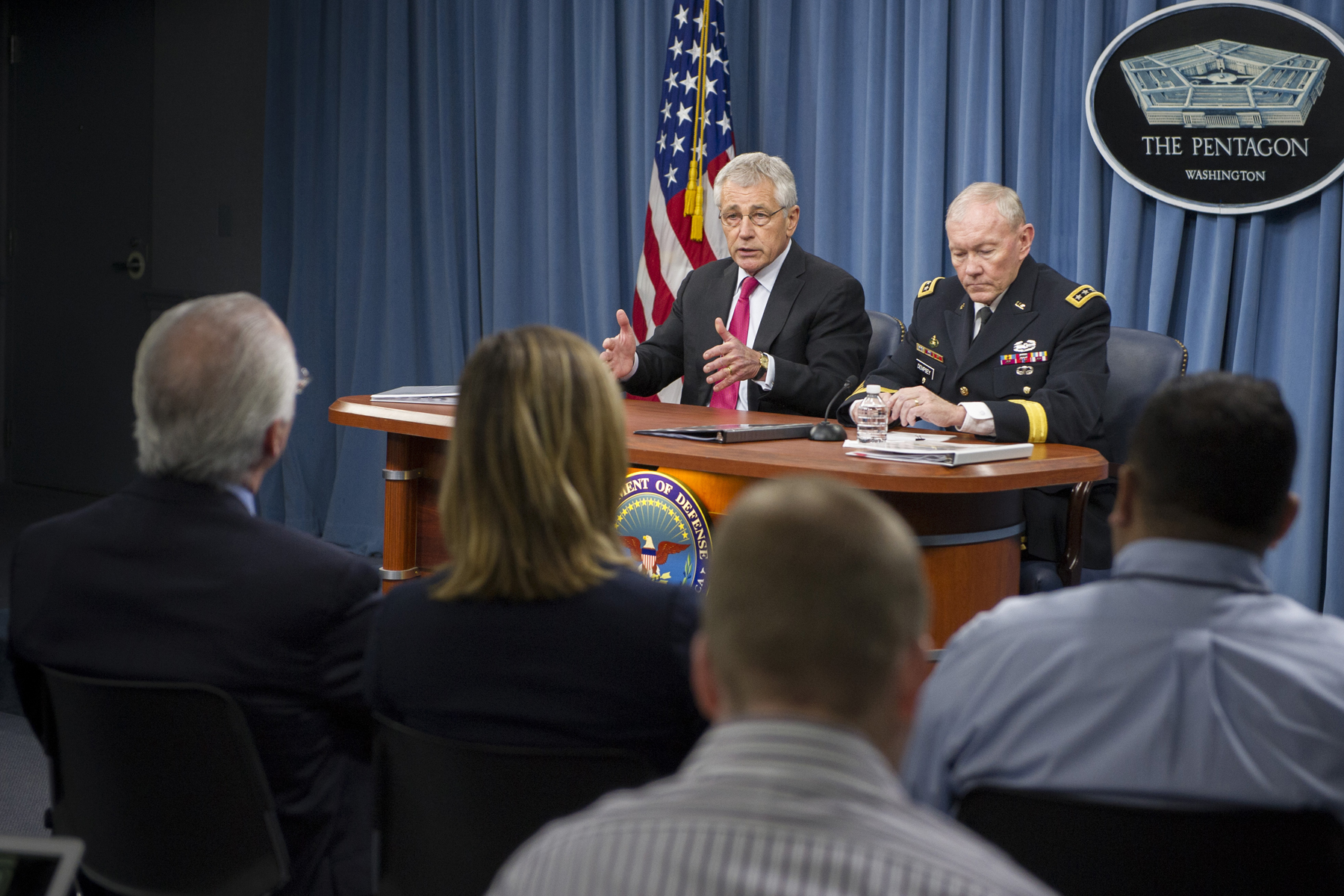 “Much of these savings will be achieved through contractor reductions,” Hagel said in a departmentwide memorandum issued Dec. 4 that detailed the results of the department’s organizational review.

The realignment also calls for several major organizational changes, including the elimination of five deputy undersecretary positions and various office consolidations, which Hagel said he wants in place by Jan. 1, 2015.

Staff reductions throughout the Office of the Secretary of Defense will be achieved primarily through attrition. About 200 civilian positions will be eliminated by 2019. But Pentagon officials have not ruled out additional cuts if sequestration continues.

“We could be forced into making more abrupt personnel cuts that would have severe impact on morale and the department’s overall effectiveness,” states a fact sheet on the reductions.

“You should be focused on performing only those top leadership and management tasks that cannot be performed by others,” Hagel wrote in his headquarters staff memo. “Consistent with your assigned responsibilities, you should, therefore, continue to look for opportunities to divest administrative and program management responsibilities where feasible.”

Among the organizational changes mandated by Hagel is a strengthening of oversight authorities of the department’s chief information officer. The directive moves the oversight responsibilities of Pentagon business systems from the deputy chief management officer to the CIO.

The changes and reductions announced by Hagel are based largely on the Strategic Choices and Management Review, led by former Air Force Secretary Michael B. Donley. That review took “a comprehensive look at … all savings that could be achieved by reducing overhead throughout the department and streamlining organizations, including OSD and the Joint Staff,” Hagel said during a press briefing at the Pentagon.

Hagel characterized the reductions as “difficult, but necessary choices,” and said they are “only a first step” in the Pentagon’s overall post-war realignment.

“The OSD reductions are comprehensive, touching many aspects of our organization, personnel and resources,” Hagel said. “We recognize that the dollar savings generated by the OSD reductions, at least $1 billion over the next five years, is a small percentage of the sequester-level cuts, underscoring the challenges that face this department in absorbing these very large sequester-level reductions. Still, every dollar that we save by reducing the size of our headquarters and back-office operations is a dollar that can be invested in warfighting capabilities and readiness.”

Army Gen. Martin E. Dempsey, chairman of the Joint Chiefs of Staff, said the military’s Joint Staff, the combatant commanders, the service chiefs, as well as three-star headquarters and above throughout the world would also be absorbing changes and reductions.

“We have said for some time that we need to adjust or slow the rate of growth in those activities in order to ensure that the all-volunteer force remains sustainable, as well as allows us to balance the force across modernization, training, readiness and manpower,” Dempsey said.

And although he offered no specific plans to improve the department’s acquisition process, Dempsey acknowledged the current process must change.

The Pentagon must “get out of this pattern where things are acquired and delivered too slowly and too expensively,” he said. “We can’t do that ourselves. We’re going to need help across virtually each one of these areas. And we’ll be looking to gain support for that over time.”