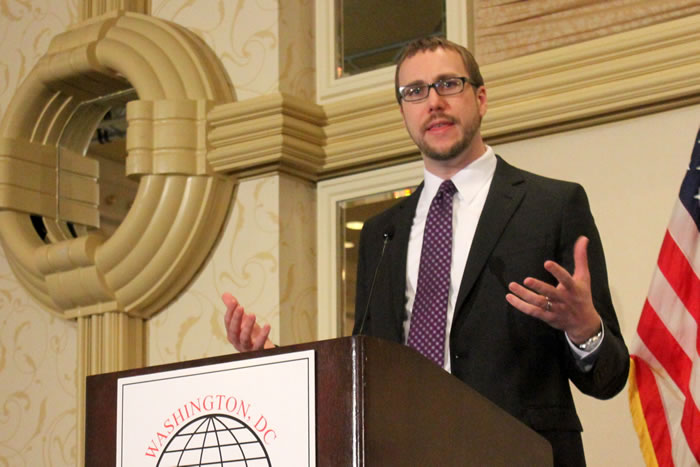 Ozment, speaking at Friday’s AFCEA DC Cybersecurity Symposium, said the executive order – by nature – is “not magical” and cannot provide the government’s critical infrastructure partners in industry with liability insurance, causing the focus to be on one the government can provide to the industry base.

“This really focuses on the government sharing information outwards and sharing threats it sees with industry,” Ozment said before the crowd of more than 500 at the Capitol Hilton in Washington, D.C. “It allows for the critical infrastructure partners to allow the government to come in when there is a threat and subvert it to help keep everyone safe during attack.”

Ozment pointed to three other key parts of the executive order:

The needs of U.S. Cyber Command

The U.S. military should act at an operational level of war in cyberspace – the same as it would in the land, air and maritime domains, said Air Force Maj. Gen. Brett Williams, director of operations for the U.S. Cyber Command.

Williams said the military must use the same joint operational and military decision-making process it uses for other battles to attack the threat in cyberspace, adding that despite its uniqueness, the cyber fight has much in common with other military missions.

“People talk about how different and mysterious the cyber domain is,” Williams said, “but it’s not any more unique than the difference between flying an airplane or steering a ship.”

Williams also acknowledged the DOD’s intention to be more offensive in cyberspace, something that had long been seen as taboo.

To help do this, Williams said U.S. Cyber Command has three needs from the technology community:

It is imperative for the government to reconstitute itself after an attack given the inevitability of a cyber attack, even with the best prevention efforts, said Department of Homeland Security Chief Information Security Officer Jeffrey Eisensmith.

“The key will be how quickly you can get back on your feet and accomplish the mission again given that you know you’ll be hacked,” he said.

Whereas information security officers in the past served primarily an auditing function, Eisensmith said that we’re in a phase of continuous monitoring, and the role of the CISO has to change significantly.

“The key is to retool our workforce away from an auditing mentality towards the continuous monitoring modality,” Eisensmith said.

Ties between physical and cyber

Suzanne Spaulding, deputy under secretary of the National Protection and Programs Directorate at DHS, said that physical and cybersecurity are inexorably intertwined and cannot be separated in the critical infrastructure arena because cyber attacks can have such significant physical consequence.

For the federal government, this necessitates a government and community approach. In the private sector this requires bringing together CEOs, CIOs and CISOs for the same mission.

“We cannot meet this challenge without a true collaboration in which we bring all of our knowledge, expertise and capabilities together,” said Spaulding, referencing the importance of private sector partnerships in critical infrastructure, cybersecurity efforts.

In addressing President Obama’s release of both a cybersecurity Executive Order and Presidential Policy Directive 21 on February 12, Spaulding said, “it is really not a coincidence that they were released on the same day. We have established an integrated implementation task force which will focus on holistically implementing both documents, drawing on expertise from across NPPD, DHS, across agencies” as well as sector specific agencies, private sector partners and academia.

Spaulding addressed the private sector partners in attendance saying, “we are coming to the table together, and we’re rolling up our sleeves and we’re going to do this in a way that recognizes that you’re part of the discussion.”

Navy will push ahead with...