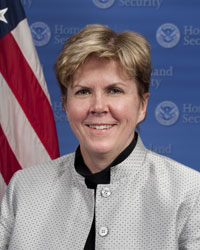 Jane Holl Lute, deputy secretary at the Department of Homeland Security, will step down from her position in early May following four years at the agency.

“It is with mixed emotions that I write to let you know that I will be leaving my position as deputy secretary in early May,” she wrote. “For more than four years, I have seen first-hand your quiet professionalism, selfless dedication to duty, and unrelenting commitment to the safety, security and resilience of this country. Your daily example of public service has been deeply inspiring to me.”

DHS Secretary Janet Napolitano praised Lute for her service in a statement, mentioning Lute was key to the agency’s efforts to improve the federal government’s cybersecurity and protect the nation’s critical infrastructure from attack.

“She was instrumental in the department’s effort to implement recommendations by the Homeland Security Advisory Council Task Force on CyberSkills, to ensure that DHS expands the pipeline of men and women with advanced cybersecurity skills, and enables us to become a top competitor for cybersecurity talent,” Napolitano said.

She continued, “Because of her service, our nation is safer, more secure and more resilient. I wish her all the best in her next endeavors.”