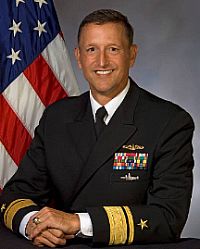 The Department of Defense has promoted Navy Rear Adm. William Hilarides to vice admiral and assigned him as commander of the Naval Sea Systems Command.

Hilarides is currently serving as special assistant to the deputy chief of Naval operations for information dominance, N2/N6, Office of the Chief of Naval Operations at the Pentagon.

NAVSEA is the largest of the Navy’s five system commands. With a fiscal year budget of nearly $30 billion, NAVSEA accounts for one quarter of the Navy’s entire budget.

With a force of 60,000 civilian, military and contract support personnel, NAVSEA engineers, builds, buys and maintains the Navy’s ships and submarines and their combat systems.

To accomplish this, NAVSEA manages 150 acquisition programs and manages foreign military sales cases that include billions of dollars in annual military sales to partner nations.

Rear Admiral Hilarides is serving as the special assistant for Research, Strategy and Integration to the deputy chief of Naval Operations for Information Dominance (OPNAV N2/N6). He advises and assists OPNAV N2/N6 on policy matters for long-range research and development, strategies and concepts, and fleet integration of enabling technologies for intelligence operations to include coordination within the Intelligence Community.

Raised in Chicago, Hilarides graduated from the U.S. Naval Academy in 1981 with a Bachelor of Science in Physics. After graduation, he served as master of the Naval Academy Sailing Squadron sloop Avenger, competing in numerous offshore racing events.  Prior to command, he served at sea aboard USS Pargo (SSN 650), USS Gurnard (SSN 662) and USS Maryland (SSBN 738), deploying to the North Atlantic, Mediterranean, Arctic and Western Pacific, as well as conducting several strategic deterrent patrols.

Ashore, he served as flag lieutenant to commander Submarine Force, U.S. Atlantic Fleet; personnel assignment officer at the Bureau of Naval Personnel; action officer on the Joint Staff in the Force Structure, Requirements and Assessment Directorate (J8); and, Requirements and Acquisition branch head on the staff of the chief of Naval Operations, where he served as the Navy representative to the Joint Requirements Panel.  Hilarides commanded the USS Key West (SSN 722) from May 1998 to November 2000 in Pearl Harbor.

In command, he deployed to the Western Pacific and conducted a major shipyard maintenance period.  Since becoming an acquisition professional in 2002, he has served as director, Advanced Submarine Research and Development, as well as the program manager of the SSGN Program. Most recently, he served as program executive officer for Submarines, responsible for all new construction submarine programs along with the acquisition and life cycle maintenance of submarine weapons, countermeasures, sonar, combat control and imaging systems.

In addition to his Bachelor of Science in Physics, he holds a master’s degree in Engineering Management from the Catholic University of America, and has completed the Air Force Command and Staff College, the MIT Seminar XXI program in International Security Affairs, and numerous acquisition schools.  Hilarides has received various personal and campaign awards, including the Distinguished Service Medal, the Defense Superior Service Medal, the Legion of Merit (2) and the Defense Meritorious Service Medal.