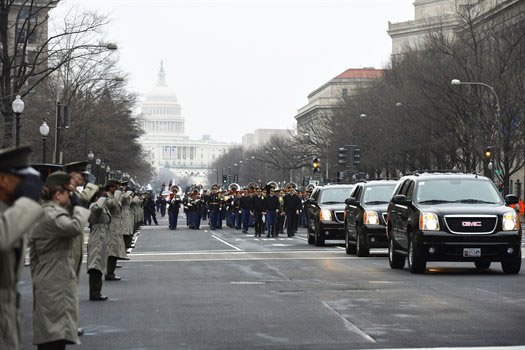 President Obama will be re-sworn in as the 44th President of the United States on Monday as part of the 57th Inauguration.

FedScoop has created a quick guide to the day for those looking to attend.

President Obama will be officially sworn in on Jan. 20, 2013, as per the U.S. Constitution. Since Inauguration Day falls on a Sunday, the ceremonial swearing-in will be hold on Monday. It will be at Capitol Hill with festivities starting at 11:30 a.m. EST.

Guests are strongly advised to take public transportation rather than drive. Parking in Washington, D.C., will be extremely limited and roads will be very congested. The following roads are closed to vehicle traffic:

Sign up to receive real-time alerts including viewing area openings and closings, missing persons, road closures, serious crimes, lookouts and weather related concerns during inaugural activities on the National Mall and parade route from the U.S. Park Police. Text INAUGURATION to 888777. Standard text messaging rates may be applied. Be sure to check with your cellular service provider regarding your text messaging plan.

The Presidential Inauguration Committee released a mobile application for Inauguration Day, available on both iPhones and Androids. The app features the ability to watch the ceremony on your mobile phone, a schedule of the day’s events, a map that lets people RSVP to meet at a certain location and historical information, such as a history of the U.S. Marine Band’s inaugural performance.

The White House will have a live stream of the swearing-in ceremony on its YouTube channel.

The presidential escort prepares for inauguration.