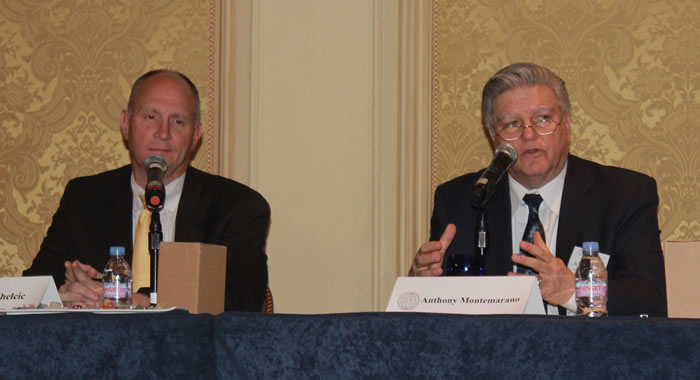 With the Department of Defense budget continuing to decrease, the amount of money spent on information technology at the Defense Information Systems Agency is expected to follow suit.

To combat this, DISA is continuing to look for spending efficiencies while still continuing to provide the warfighter with the best technology available, a panel of DISA information technology executives said during an AFCEA DC panel on Monday in Pentagon City, Va.

David Mihelcic, the agency’s chief technology officer, in particular said he expects the spending for research and development within DISA to decrease, which means an increased reliance on industry to innovate.

“We’re not trying to reinvent the wheel, but exploit the best wheel possible,” Mihelcic said. “The reality is we’re not going to have the money to do things on our own, so we’re going to need innovation on your nickel.”

Montemarano said the agency is making contingency plans for sequestration, as is the rest of DOD, but couldn’t specifically say how exactly it would impact the agency as a whole.

“Trust me, we are as worried about sequestration as you are,” Montemarano said, noting that about 30 percent of the agency’s budget is appropriated while the rest comes from its government customers.

Outside sequestration, Montemarano said the agency’s biggest focus is on creating the Joint Information Environment. He said the highest levels of the Pentagon, including the secretary, are behind the project and it’s currently moving through the approval processes.

As for what it will look like, Montemarano emphasized that JIE will leverage new technologies, but will not develop any on its own. The goal, he said, is bringing all of DOD’s components into one environment.

Orndorff said DISA’s main goal in the cyber defense area is finding new ways to harness the capabilities it already has in place in the enterprise. He said that DISA has a robust set of capabilities, but they are only being used to a fraction of their potential.

For example, he said DISA put in place a web content filtering firewall that is the latest generation of its kind. He wants to figure out how to use that in other aspects of DISA instead of the one job that it’s doing. The same goes for technologies like public key infrastructure.

When it comes to acquisition, Carter said the agency is looking for efficiencies in all areas of technology, along with finding more common approaches to security.

Carter said DISA wants a broader range of enterprise services to the warfighter and, from an acquisition standpoint, wants to be able to insert more technologies into the enterprise more quickly to get them in the hands of the warfighter.

“We want to take a longer view of acquisition, so we are getting the warfighter the latest advances in technology,” Carter said.