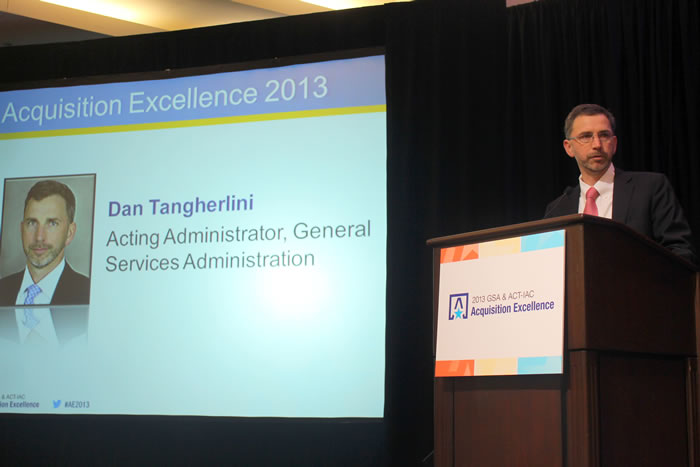 With the current fiscal environment in the federal government, the mission of the General Services Administration has never been more important than it is today, said agency acting administrator Dan Tangherlini on Thursday.

Tangherlini, kicking off GSA and ACT-IAC’s Acquisition Excellence Conference 2013 at the Grand Hyatt in Washington, D.C., said the agency has approximately a 10 percent market share when it comes to government acquisition, a number he’d like to see increase.

“Agencies are being forced to reduce their spend and sequestration has only intensified the problem,” Tangherlini said. “The environment we’ll be operating in is here for the foreseeable future.”

To help the government become more efficient, Tangherlini added that it’s key for GSA to become a model the rest of the government could look to as an example of success.

That’s why the top-to-bottom agency review that Tangherlini initiated shortly after taking office nearly a year ago is so important.

He pointed to the consolidation of administrative offices, such as bringing together all the chief information officers under current CIO Casey Coleman, as an example of reducing duplicative services.

“We are committed to the continuous evaluation of our processes and finding commonsense solutions for both GSA and the government as a whole,” Tangherlini said.

‘Mythbusters 3’ on the horizon

Joe Jordan, administrator of the Office of Federal Procurement Policy at the White House, said that his office is planning a third “Mythbusters” campaign.

The previous two iterations tackled different misconceptions in the world of federal acquisition and set out to set the record straight.

The first version of Mythbusters came out in 2011 while the second version came out last year, and its primary mission is to help acquisition officials in the federal government work more closely with industry to get the best deal for their agency.

That guidance will include an increased leverage of shared services.

“We don’t have the luxury of creating individual systems for each agency anymore,” Dong said.

Dong further discussed the federal fiscal situation, saying “flat is the new up,” and people need to recognize the federal government is in a new normal where increasing year over year budgets are a thing of the past.

“The fiscal situation has created an urgent challenge for all of us to minimize the impacts of reductions and sequestration are having on our missions,” Dong said.

The Government Accountability Office’s Jonathan Kang, the deputy assistant general counsel who heads up contract protests, said that despite the uptick in protests, the GAO is not going to look at the intent behind the protests.

Kang said there is a belief that a number of the companies protesting contracts do so with ill intentions, either to elongate a current contract they have or to try to take new work that they had a losing bid on. Kang said, though, GAO is not interested in the reason why someone protests.

“The contractor will never admit to having an invalid reason for the protest, so its not really a valid question to ask and actually may discourage someone that is doing a protest in good faith,” Kang said.

He also added that GAO would not look to make the loser of a bid protest pay the legal fees of the winner as that goes against the American legal system.

“What we want to do bring a sense of accountability to the system,” Kang said. “The frivolous protests will be quickly cleared out and the true ones will be brought to the forefront, which will encourage fair competition and get the American taxpayer the best product for their money.”