With less than three months left in the final quarter of the fiscal year, the United States Postal Service could enter fiscal year 2015 more than $5 billion in the hole. But a new report released this week summarizing a recent closed-door meeting of government and industry experts said the USPS should consider providing services for government agencies to cut costs governmentwide and bring some additional revenue to its multi-billion dollar debt.

The white paper stems from an April 6 roundtable discussion between the USPS Office of the Inspector General, IBM and the Postal Innovation Platform. At that point, USPS has just ended a second quarter with a $1.9 billion deficit, adding to a $350 million loss in the first. Just last week, the third quarter finances revealed another $2 billion added to the agency’s debt.

Roundtable participants, however, recommended the “facilitator” approach in which the post office could serve as a “front door” for multiple agencies and help cut costs by reducing physical presences across agencies.

Nancy Pace, the chief of customer service of the passport division at the State Department, called the Postal Service a “wonderful partner.”

But offering access to already-existing platforms isn’t all the independent agency is considering. According to David Williams, the post office’s inspector general, the Postal Service should consider dipping into the e-government infrastructure by providing points of access to e-government services for citizens who have limited Internet access.

“The Postal Service would help government bridge the digital divide while fulfilling its mission of binding the nation together,” the white paper said. 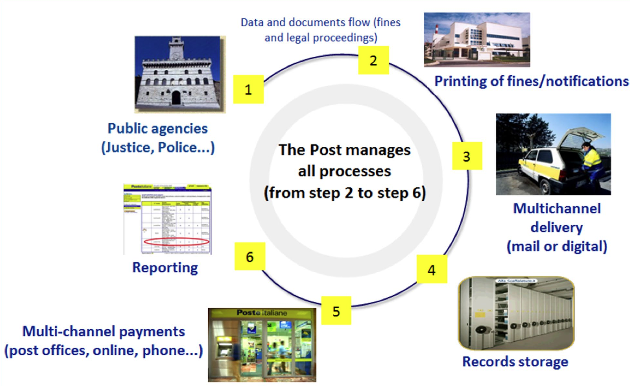 According to the white paper, the Italian Post provides a forum for integrating the process of dealing with traffic violations.
Source: USPS Inspector General

During the innovation roundtable, Ulisse Del Gallo, a representative from the Italian Post, demoed a traffic violation notification system that integrates printing, mailing and emailing tickets into one platform.

Based off an example from the Swiss Post, Williams said the postal service, through its role as a “highly-trusted intermediary,” can facilitate on and offline services that require high security.

According to the white paper, the trusted status of the Postal Service could open the door to electronic health record management, notarizations, payments, voting by mail and online voting. In Switzerland, all Swiss citizens have been able to vote by mail since the 1990s, while in the U.S., only certain states offer voting by mail services.

In order to make any of these concepts a reality, the Postal Service needs to find new ways to fund government services. Elizabeth Pemmerl, a representative from private-sector company NIC Technologies, used examples from her own company to suggest how public-private partnerships could save the post office and the government money and provide more efficient and available services to citizens.

Although cutting costs for the post office is an objective, the agency can leverage its digital infrastructure, address databases and delivery networks with its trusted role to reduce costs governmentwide, according to the report.

“[The post office] can create a large portfolio of physical and digital government solutions to assist agencies in reducing costs, streamlining processes, improving interagency coordination and better serving citizens,” the white paper said. “To succeed in the government services market, though, [post offices] need to invest in developing the appropriate set of skills and capabilities required to deal with a complex customer like the government.”