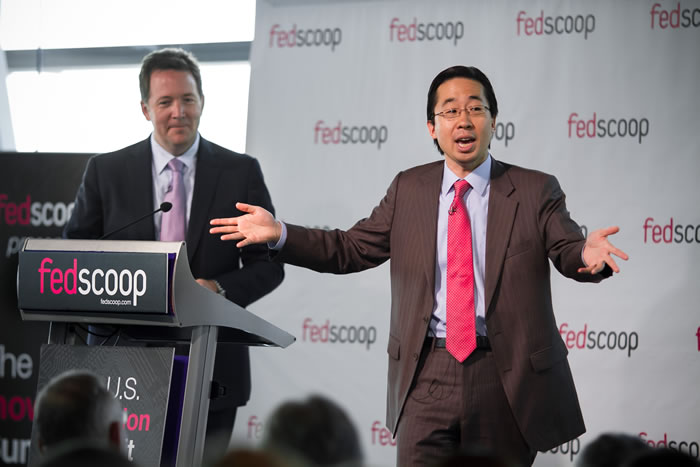 FedScoop held its first U.S. Innovation Summit Wednesday at the Newseum, drawing more than 500 attendees from government and industry to provide a platform for thought leaders to collaborate on the best ways to encourage public and private sector innovation.

Symantec President and Chief Executive Officer Enrique Salem opened the event with a “Desconstructing Innovation” keynote, followed by the Honorable Gerry Connolly, the Democratic congressman from Virginia’s 11th District, who discussed how tapping into technology can improve services and realize savings across the federal government.

“Before coming to government, I spent my almost my entire career as an entrepreneur,” Park told FedScoop before his presentation, “and in that time I’ve never been surrounded by as many who have that same entrepreneurial drive and spirit than I do right now in the federal government.”

Department of Energy Chief Technology Officer Pete Tseronsis discussed the energy data initiatives and was followed by Intel Labs Chief Technology Officer and Corporate Vice President and Director Justin Rattner, who discussed 21st century industrial research. It was Rattner’s last appearance before flying back to the company’s headquarters in Portland, Ore., where he was to meet with renowned physicist Stephen Hawking.

“It is no doubt clear to those of you who work inside the Beltway that the word ‘innovation’ is on the lips of everyone from corporate executives, government leaders and university presidents,” Rattner said. “Each of them talks about the need for the U.S. to accelerate its pace of innovation or be overrun by innovation coming from virtually every other point on the planet. The message is simply ‘innovate or die.'”

“The barriers of entry to R&D have been lowered,” he said. “Crowdsourcing is allowing more development than ever.”

Dr. Ken Gabriel, the acting director at DARPA, discussed how his agency looks to spur innovation and the things that lead to the massive amounts of creative solutions DARPA comes up with.

“Intelligently challenging world views inspires innovation,” Gabriel said. “As a change agent, you have to embrace the fact you will be unpopular.”

Patrick Gallagher, under secretary of Commerce for standards and technology, closed the event with a talk on how innovation is a key driver for economic growth and competitiveness.

“Innovation is a ‘disruptive policy’ that forces government and industry to work together in entirely new ways,” Gallagher said.

The event featured music by White House DJ Donald Syriani who kept the event moving with a range of upbeat tracks showcasing his eclectic and sophisticated style.

ArtJamz, the National Capital Region’s original source of participatory paint parties, provided an area for attendees to express their own creative innovations. The section included easels with pictures of outdated technologies like Walkmen and early generation mobile phones and asked participants to find their inner artist and draw or paint what the future of these technologies will look like.

FedScoop will further highlight the talks and presentations over the following week, beginning with an in-depth look at VanRoekel and Park’s talk on Monday.

TikTok could soon be...

by Billy Mitchell • 5 hours ago
Acquisition