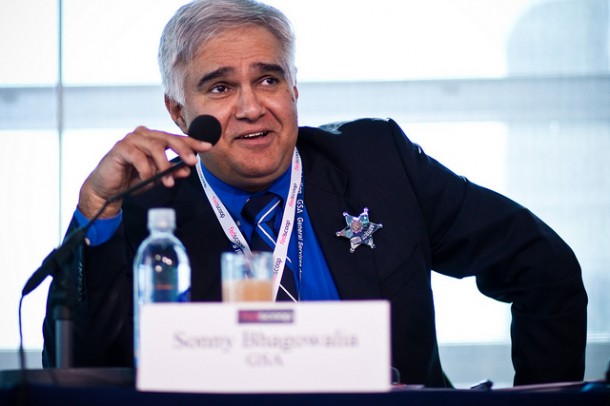 Sonny Bhagowalia will take over as Treasury CIO after spending three years in Hawaii. (Credit: FedScoop)

Sanjeev “Sonny” Bhagowalia has been named chief information officer of the Treasury Department, FedScoop has learned.

According to Bhagowalia’s LinkedIn page, he will serve as both CIO and deputy assistant secretary of information systems. His first day is Monday.

Bhagowalia, who has held a variety of federal IT positions in the past, comes from Hawaii, where he served as the state’s first CIO, as well as chief adviser on technology and cybersecurity to Gov. Neil Abercrombie. His work in Hawaii landed him a StateScoop GoldenGov award earlier this year.

The Treasury position became vacant after Robyn East retired in June. East had served as Treasury CIO since March 2011. Deputy CIO Mike Parker had been filling in on an interim basis.

Prior to his role in Hawaii, Bhagowalia held a number of federal positions, including deputy associate administrator in GSA’s Office of Citizen Services and Innovative Technologies, CIO of the Interior Department and Bureau of Indian Affairs, and a program management executive at the FBI. Prior to joining the federal government, he spent 14 years at Boeing as chief engineer of business development and systems integration.

As Treasury CIO, Bhagowalia will be in charge of a $3.5 billion IT/IRM portfolio and will be responsible for the department’s IT strategy, managing its IT investments and leading new technology initiatives.

“Over the past three years, Sonny has helped Hawaii leapfrog from the back of the pack in technology and cybersecurity to the front of the line and we are now one of best in the country,” Abercrombie said in a prepared statement.  “Under Sonny’s leadership, our government transformation program has garnered an unprecedented 25 national awards, including last week’s announcement of his 2014 Enterprise Architecture (EA) Hall of Fame Award for Individual Leadership in EA Practice, Promotion and Professionalization.”

The governor expressed confidence that Hawaii has “the right plans” thanks to Bhagowalia’s leadership.