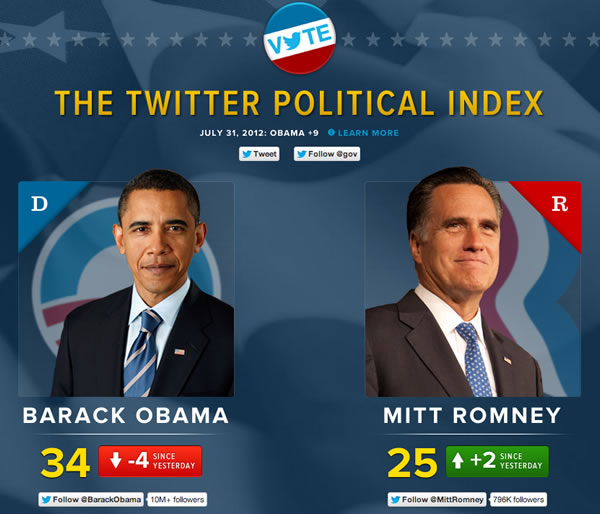 Twitter launched a new political index on Wednesday that will provide a daily measurement of the platform users’ feelings toward the presidential candidates based on nearly two million tweets sent each week.

The Twitter Political Index is built in partnership with the data analysis firm Topsy and two polling firms, The Mellman Group and North Star Opinion Research.

Each day between now and the election, the index evaluates and weighs the sentiment of tweets mentioning President Barack Obama or Republican challenger Mitt Romney relative to the more than 400 million tweets sent on all other topics.

For example, a score of 73 for a candidate indicates that tweets containing their name or account name are on average more positive than 73 percent of all tweets, Twitter said.

“Just as new technologies like radar and satellite joined the thermometer and barometer to give forecasters a more complete picture of the weather, so too can the Index join traditional methods like surveys and focus groups to tell a fuller story of political forecasts. It lends new insight into the feelings of the electorate, but is not intended to replace traditional polling — rather, it reinforces it,” said Adam Sharp, head of Twitter government, news and social innovation at Twitter.

by Jackson Barnett • 1 day ago
Tech