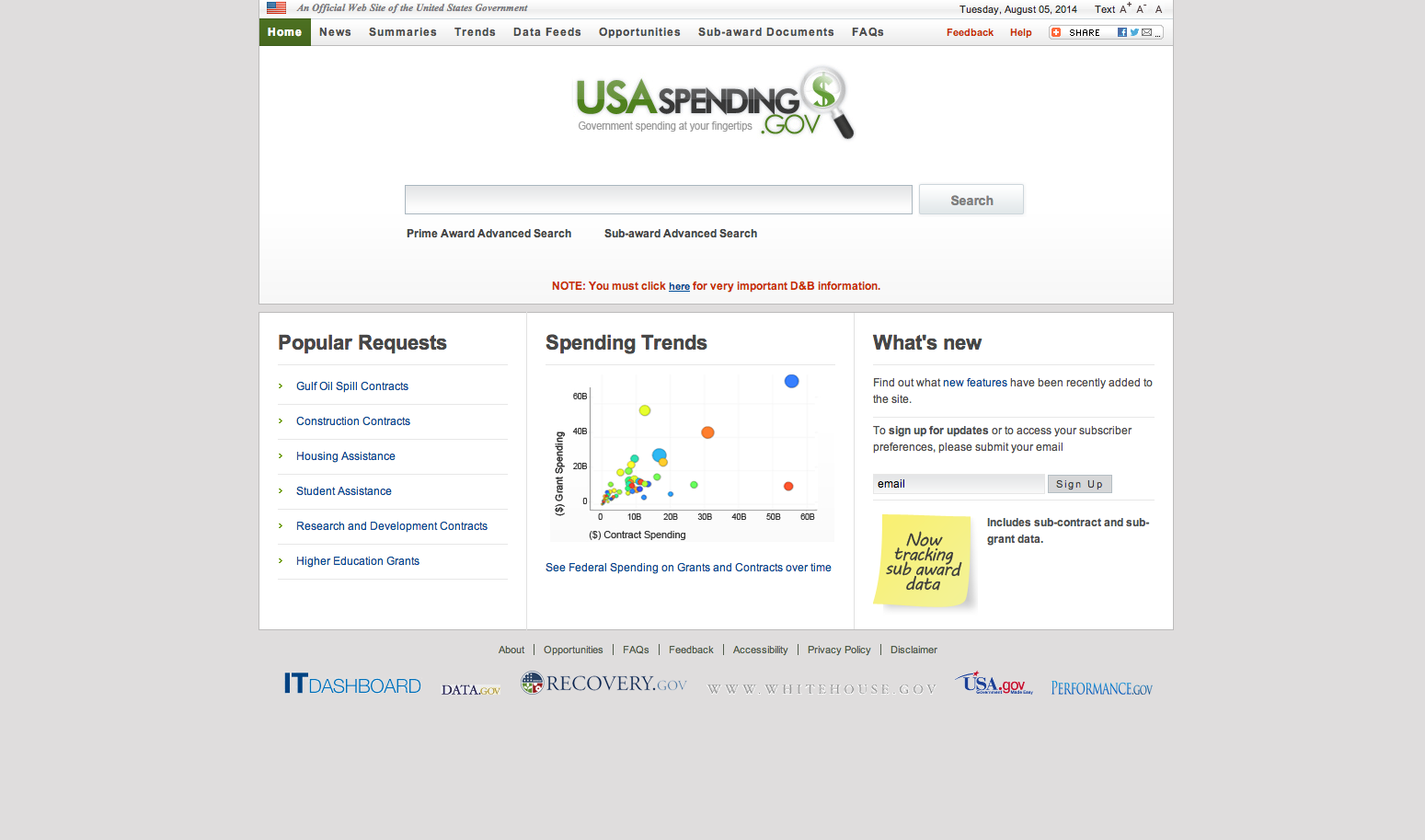 USASpending.gov has made a solid effort to increase transparency in how the federal government handles taxpayer money each year, but when comparing the data on the website to agency records, the Government Accountability Office found it’s riddled with inconsistencies.

Congress decided in 2006 that taxpayers deserve to know how the federal government spends trillions of dollars each year in contracts and awards, so it enacted the Federal Funding Accountability and Transparency Act and required the Office of Management and Budget to establish a public website to highlight federal awards. Of 37 agencies with a budget authority of more than $400 million, GAO found that 33 had managed to report at least one contract for fiscal year 2012 on USASpending.gov, while the other four claimed exemptions.

However, not much of what was on the website was consistent with actual record, according to the GAO study. “GAO estimates with 95 percent confidence that between 2 percent and 7 percent of the awards contained information that was fully consistent with agencies’ records for all 21 data elements examined,” the report said. “The element that identifies the name of the award recipient was the most consistent, while the elements that describe the award’s place of performance were generally the most inconsistent.”

Additionally, most agencies failed to immediately report information on assistance awards, which totaled hundreds of billions of dollars. “We found that agencies generally reported information on contracts but did not report timely assistance information, leading to underreporting of nearly $619 billion for awards made in fiscal year 2012,” GAO said. “Many of those awards were subsequently reported by agencies.”

As time went on, agencies subsequently reported more and more of the either unreported or improperly reported awards, a total which bloomed from $2.6 trillion in February 2013 to $3.2 trillion by April 2014. Agencies cited many excuses for not reporting awards on USASpending.gov properly, including technical issues, aggregation of awards, unclear understanding of reporting requirements and lack of internal oversight.

This isn’t the first problem GAO has identified regarding USASpending.gov data. In March 2010, GAO found OMB’s compliance with FFATA to be lacking in some areas, such as the requirement to report about the website to Congress. A sample of 100 awards audited all had at least one data error, and reports on programs at nine agencies for fiscal year 2008 were missing. And again in July 2012 and September 2013, GAO reported similar inadequacies.

OMB placed the responsibility in the hands of the agencies to make sure what they were uploading to USASpending.gov was fully and accurately reported. After this audit, GAO said “this approach has had limited effect on the overall quality of the data on the website, reinforcing the need for a more comprehensive oversight process by OMB and more specific guidance from OMB on how agencies are to validate information reported to USASpending.gov. Until these weaknesses are addressed, any effort to use the data will be hampered by uncertainties about accuracy.”

GAO recommended that OMB implement governmentwide oversight to “regularly assess the consistency of information reported by federal agencies to the website other than the award amount.”