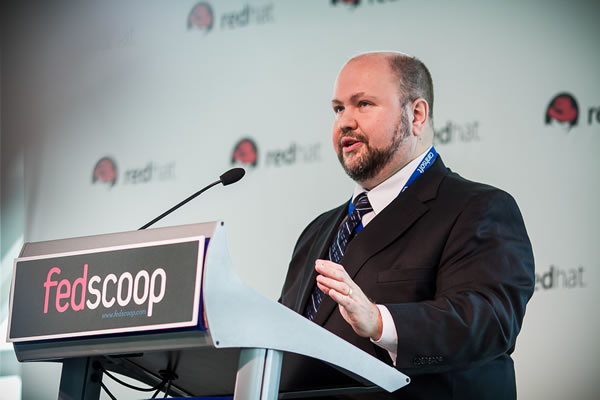 The U.S. Patent and Trademark Office runs like a business, meaning it relies on the fees that it collects instead of taxpayer dollars to operate.

That means, said agency Chief Information Officer John Owens, that any service disruptions to the agency’s information technology come out of his budget and effect his – if any – bonus.

“It may sound odd, but I tell my team that if our system crashes, I want it to make the front page of the Washington Post,” Owens said. “I want it to be so rare that it crashed that it’s front page news, similar to if Amazon or Google crashed.”

Owens admits he’s not at that point, but being one of the federal government’s trailblazers when it comes to the use of open source and virtualization has helped him move closer to that point.

Owens said his goal is a system that runs 24 hours a day, seven days a week, 365 days a year without service interruptions.

To do that, Owens said he has gone with an open virtual environment that also allows him to not get locked into a vendor.

“If a vendor isn’t performing then we can move to someone else,” Owens said. “That might make the vendor community nervous to hear that, but it gives us the flexibility to not get stuck in a system that isn’t working for us.”

What Owens said he will pay for is top-of-the-line support.

“We need to save money, like other agencies, but we will pay for expertise,” Owens said. “That’s what we need. We can get all the free systems, but they are nothing without the knowledge of how to get the most out of them.”