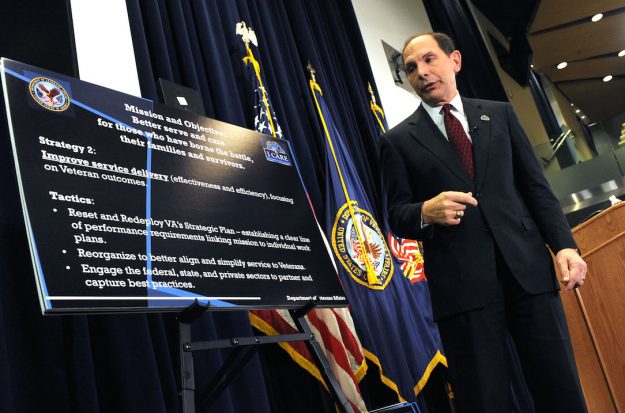 There’s little question that the Department of Veterans Affairs had a bad year in 2014. Systemic leadership failures rippled through the entire enterprise, from administration of patient care to management and oversight of major technology programs. Those failures resulted in a campaign led by the House Committee on Veterans’ Affairs to force a much-needed agencywide reorganization — the largest in VA’s 84-year history.

A few months after the resignation of Eric Shinseki, newly appointed VA Secretary Robert McDonald unveiled his reform plan, known as the Road to Veterans Day, during his first major press conference at VA headquarters. Although the 90-day plan was designed to institute a series of quick measures the agency could roll out in the short-term to correct the biggest problems standing in the way of veterans accessing timely care, McDonald’s vision called for a fundamental restructuring of VA as an agency and a culture. McDonald referred to the approach as sustainable accountability — a top-to-bottom overhaul effort that deals with everything from training to corporate culture and website design.

But progress at an agency as large, decentralized and complex as VA does not come easy. By November, VA began finalizing its plans to replace its outdated scheduling system with a commercial solution. But questions about the security of veterans’ data continued to plague the agency. According to VA’s monthly information security report for October, the agency blocked more than 12 million intrusion attempts and blocked or contained more than 206 million pieces of malware. In at least 27 cases, malware was discovered on various medical devices, such as heart monitors. The department also reported at least 765 incidents involving the potential compromise of personally identifiable information belonging to veterans.

VA continued to struggle with the perception that it was not holding accountable those responsible for misconduct. Although a lengthy appeals process was to blame in most cases where a senior official faced punishment or firing, a number of executives were allowed to retire without consequence. One of those cases involved Susan Taylor, the Veterans Health Administration procurement official who was removed from her position after an inspector general report accused her of “acting as an agent” of reverse auction contractor FedBid. Taylor was allowed to retire in October.

Despite obvious challenges, VA officials who spoke to FedScoop throughout the year outlined significant progress on a series of high-tech efforts designed to bring immediate relief to the difficulties that have plagued the agency’s operations and the ability of veterans to access care and services. In addition to incremental improvements in the existing scheduling system, VA managed to deploy clinical video teleconferencing, which is increasing access through an automated Web-based interface. The agency also completed initial code development of a direct patient scheduling application, which is now moving to testing, compliance and production approval ahead of an anticipated May 2015 release.

VA also completed the rollout of version 7.1 of its claims-processing system called the Veterans Benefits Management System, or VBMS. According to agency officials, VBMS has allowed VA to move to a paperless process and 90 percent of all claims under VA review are now in VBMS. New functionality includes the ability for authorized users to download multiple documents simultaneously, and the addition of the ability to ingest Disability Benefits Questionnaires from Veterans Health Administration contractors and additional Veterans Benefits Administration contractors.