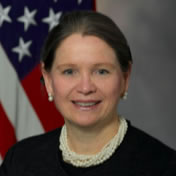 Wenchel was previously the director of Cyber, Information Operations and Strategic Studies in the Office of the Under Secretary of Defense for Intelligence where she oversaw departmental activities around policy development.

She replaces Adm. Mike Brown, who retired in January.

Mrs. Rosemary Wenchel is the Director of Cyber, Information Operations and Strategic Studies in the Office of the Under Secretary of Defense for Intelligence. She is responsible for Departmental activities pertaining to policy development, guidance, and oversight of Information Operations (IO). She exercises supervisory authority over specified Department Activities which provide analysis and integration for the Secretary of Defense and participating Defense Components.

Mrs. Wenchel joined the Office of the Secretary of Defense staff in 2006 as the Senior Advisor for IO and Strategic Studies, where she was the principal technical advisor for complex IO and classified technology integrating activities for military departments, combatant commands, and intelligence agencies. In 2007, Mrs. Wenchel also assumed responsibility for the IO Division as Acting Division Chief, directing policy, resources, and programmatic strategies for DoD IO.

Prior to joining OSD, Mrs. Wenchel was the Director of Navy Tactical Exploitation of National Capabilities (TENCAP) for the Deputy Chief of Naval Operations for Communication Networks, OPNAV N6. She was also the Deputy Branch Head for Battlespace Awareness, TENCAP, and IO.

From 2002 to 2005 Mrs. Wenchel served as the Chief Scientist to the Commander, Naval Security Group for IO and Cryptologic research and development, acquisition programs, and analytic modeling. Mrs. Wenchel joined the Naval Information Warfare Activity in 1995 as the Director of the Naval Information Warfare Analysis Center. In 1999, she assumed the role as the Head of the Computational Analysis, Design Engineering, and Testing Department at the Naval Research Lab. Mrs. Wenchel began her professional career with the Naval Security Group as a Computer Systems Programmer in 1989.