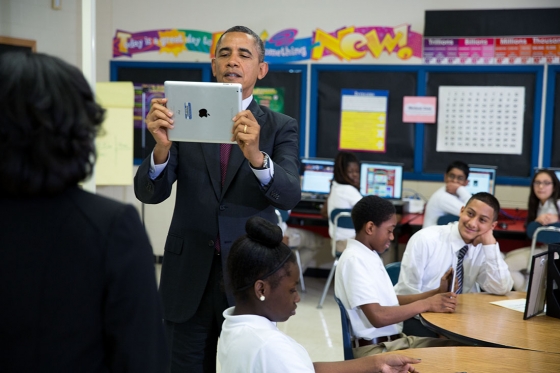 In what is being called the most ambitious digital learning initiative in the country’s history, the White House on Tuesday announced plans to bring next-generation broadband to 99 percent of the nation’s schools by 2017.

Under the guide of the ConnectED initiative, the plan, which includes a $2 billion investment from the Federal Communications Commission, would bring cutting-edge technologies and learning techniques into almost every classroom in America.

As of today, less than 30 percent of the country’s schools have the broadband needed to connect to modern technology such as tablets and advanced online learning tools.

President Barack Obama, who made the announcement at Buck Lodge Middle School in Adelphi, Md., also announced that private sector companies including Microsoft, Apple and Verizon have combined to commit more than $750 million to deliver cutting-edge technologies to the classroom.

“Microsoft heard the president’s call on our industry to step up, and we are privileged to participate in ConnectED by making a significant commitment today,” Margo Day, vice president, U.S. education for Microsoft, said in a blog post.

She continued: “That means our partners will bring to market a multitude of great device offerings, at prepriced levels, specifically for schools to choose from. Schools are going to have amazing choices to ensure their students have the best products and experiences in their classrooms.”

The private sector investments include:

The State Educational Technology Directors Association, a nonprofit membership association representing state and territorial educational technology leaders, has advocated for U.S. schools to have 1 gbps of high capacity for broadband service per 1,000 students by the 2017-2018 school year.

The White House or FCC did not specify the particular bandwidth that will be delivered to each school, but promised the Internet would be “high-speed.”

Gene Sperling, the director of the National Economic Council, said the donations are meant to have a “multiplier effect” on the targeted schools. Many students, for instance, need working laptops before they can make use of the broadband access the program is designed to provide.

“It’s quite safe to say that millions and millions of young people will be affected,” Sperling said. “Everything announced here is going to have a stronger impact because of its cumulative effect.”

Obama will be able to increase government spending on the ConnectED program because FCC decided to more quickly disburse money already intended to build capacity for high-speed Internet and for training educators on emerging technology.

“As we consider long-term improvements to the program,” FCC Chairman Tom Wheeler said, “we will take immediate steps to make existing funds go further, significantly increasing our investment in high-speed Internet to help connect millions of students to the digital age.”