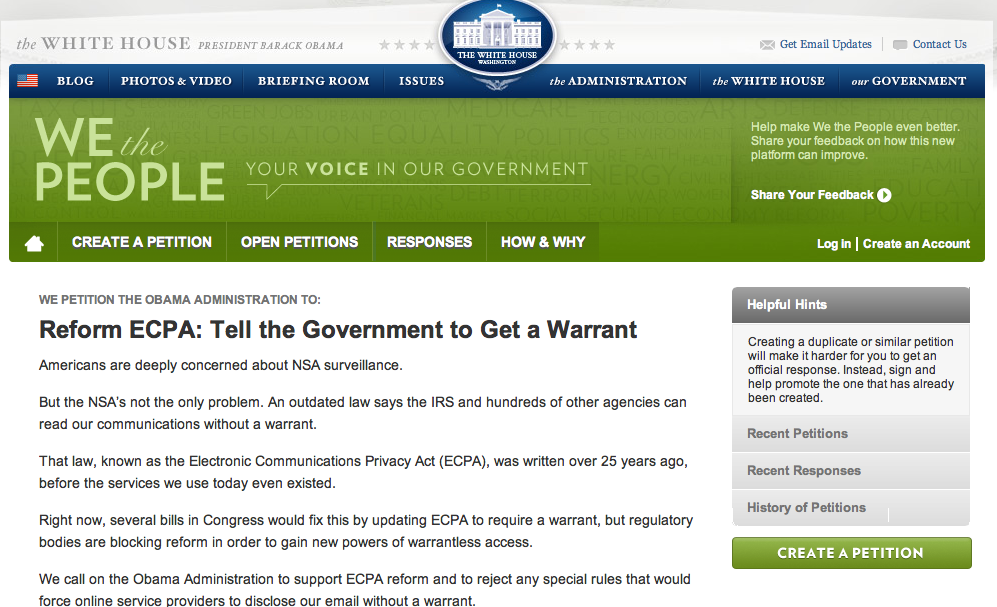 According to WHpetitions.info, 88 percent of petitions on the We The People platform have been answered.

A petition calling on the Obama administration to support reform of the Electronic Communications Privacy Act, a privacy law written more than 25 years ago, has passed its signature threshold on the We The People petition platform.

The petition titled, “Reform ECPA: Tell the Government to Get a Warrant,” has been signed by 102,541 people so far, 2,000 signatures more than it needs to get a response from the White House.

“Americans are deeply concerned about [National Security Agency] surveillance,” reads the petition. “But the NSA’s not the only problem. An outdated law says the IRS and hundreds of other agencies can read our communications without a warrant.”

Movement to reform the bill is already in the works.

The Senate Judiciary Committee has approved a bill that would update the ECPA, and it’s still waiting for a vote by the Senate. The bill would extend protections to data stored in the cloud.

The Electronic Privacy Information Center sent a letter to the House Judiciary Committee in March, recommending a review of the law. Under the current bill, only a subpoena and not a search warrant, is required to gain access to email older than 180 days. Information and old posts on social media and mobile geolocation data are also subject to easy collection under current law.

However, when the White House will respond is unclear.

The website WHpetitions.info has tracked all petitions that have reached their signature threshold, and monitored their wait times for hearing back from the White House.

According to the site, 237 White House petitions have met their signature thresholds; 88 percent received responses. Out of those 209 petitions that were answered, the average response time was 69 days. The average waiting time for the 28 unanswered petitions is 297 days.

Eli Dourado, creator of WHpetitions.info, said the data seems to suggest the We The People platform is more of a political ploy than an agent of change. In the six months following Obama’s re-election, petitions began to pile up without receiving prompt responses.

“I think it shows the petitions are somewhat a political move,” Dourado said. “The goal is more to seem open than actually be open.”

The terms of the We The People platform state the White House may decline to respond if a petition addresses “certain procurement, law enforcement, adjudicatory, or similar matters properly within the jurisdiction of federal departments or agencies, federal courts, or state and local government.”

A response from the White House, however, doesn’t necessarily mean a solution to the issue addressed in the petition. Responses can come in the form of a suggestion or an apologetic decline with an accompanying explanation why some solutions involved need to be addressed on a policy level.

by Jackson Barnett • 20 hours ago
Acquisition